TAG HEUER REIMAGINES THE LEGENDARY "DARK LORD" FOR ONLY WATCH 2021

TAG Heuer announces its return to the charity auction Only Watch with the TAG Heuer Only Watch Carbon Monaco, a unique, high-end piece made entirely of carbon and finished by hand. 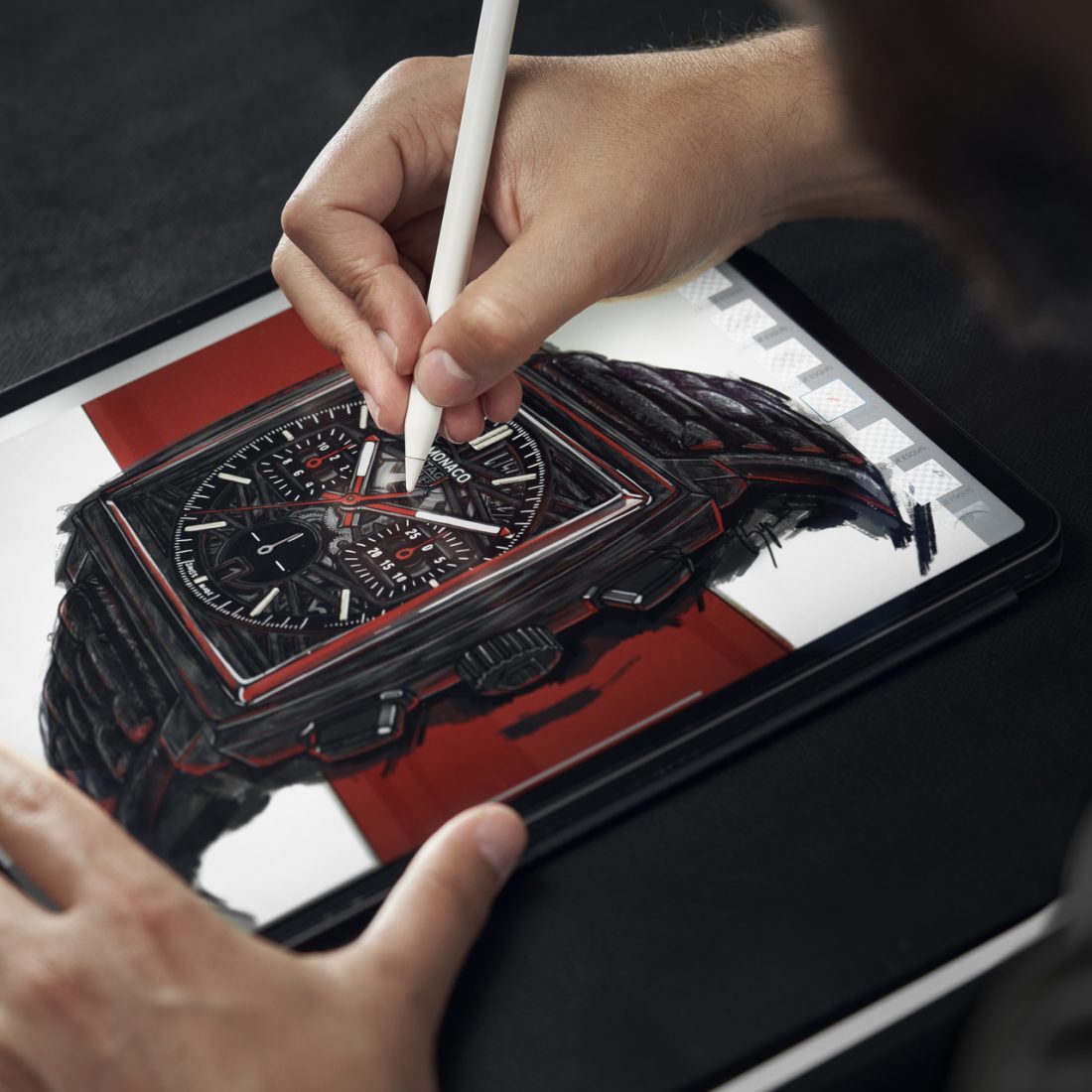 The watch will be auctioned at Only Watch 2021, the biennial charity watch auction, to be held this year in Geneva on 6 November.

"Only Watch has become one of the highlights of the watch calendar and we are so happy to participate again and to help raise vital funds for Duchenne Muscular Dystrophy research.", these are the words of Frederic arnault, managing director of TAG Heuer.

"It is also our great pleasure to present at auction the TAG Heuer Only Watch Carbon Monaco, one of the most spectacular, imaginative wrist watches we have ever created." 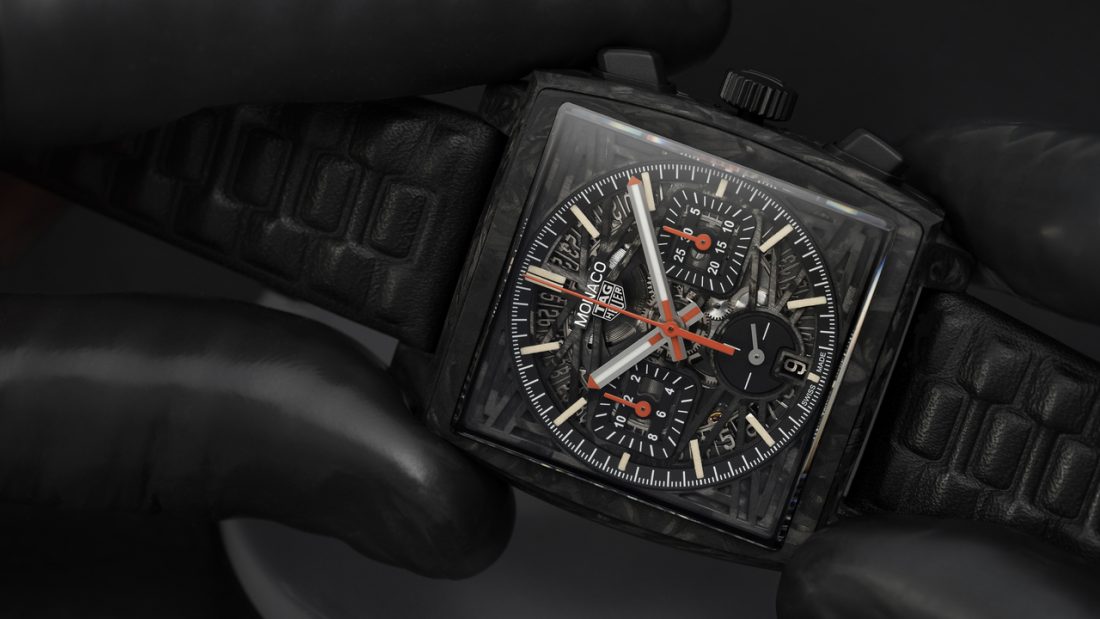 The piece with a carbon case is a true tour de force in watchmaking, which plays on over half a century of TAG Heuer's experience, while also embracing the best of savoir faire and innovation. The result is a very special timepiece that is both a loving nod to the past and a TAG Heuer symbol for cutting-edge Swiss watchmaking. 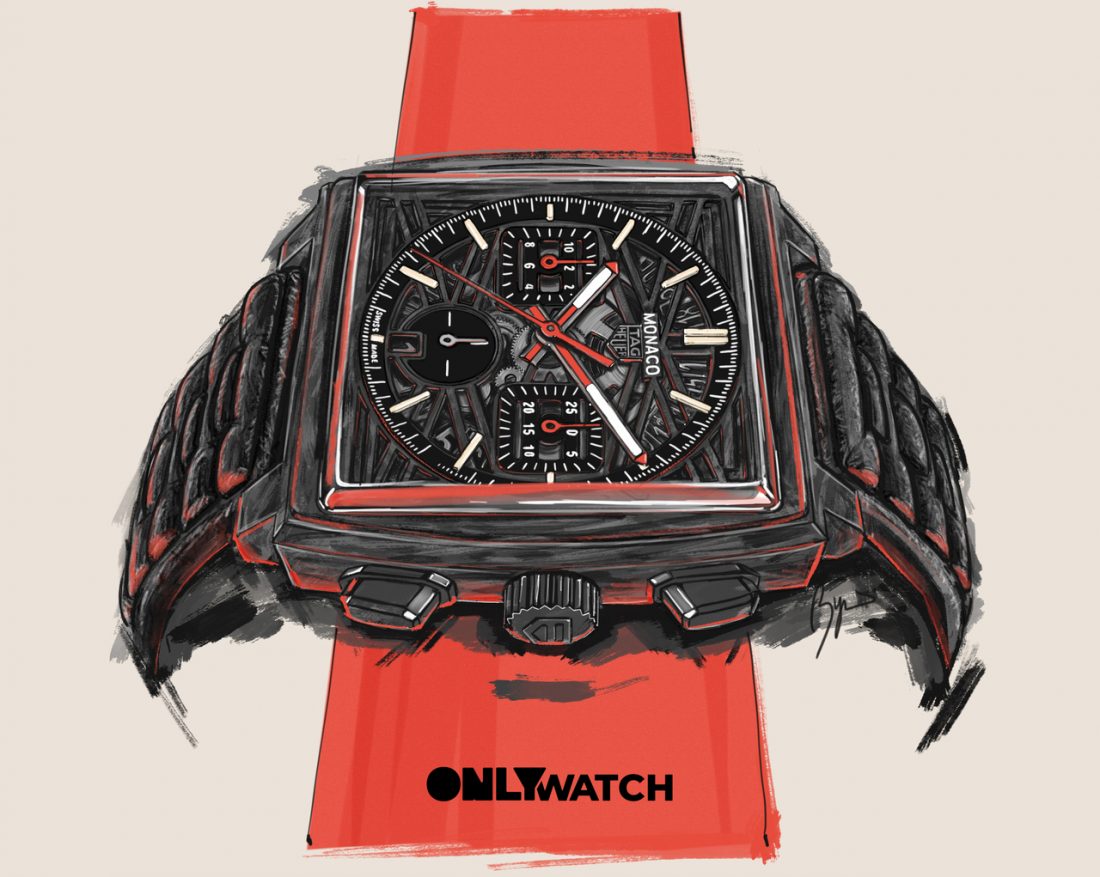 Only Watch was founded by Luc Pettavino and was held for the first time in 2005. The event, which is under the patronage of HSH Prince Albert II of Monaco, is entering its ninth edition. It continues to unite the best watch companies in the world, donating spectacular unique watches to auction. Only Watch has raised more than € 70 million to support research projects on Duchenne muscular dystrophy, with 99 percent of the proceeds going directly to funding these projects.

“We wanted to support this magnificent initiative with a unique and memorable watch that celebrated a legend of our past, but which also showed our passion for fine watchmaking, innovation, aesthetics and
avant-garde design "Arnault continued. "The TAG Heuer Only Watch Carbon Monaco is that watch." 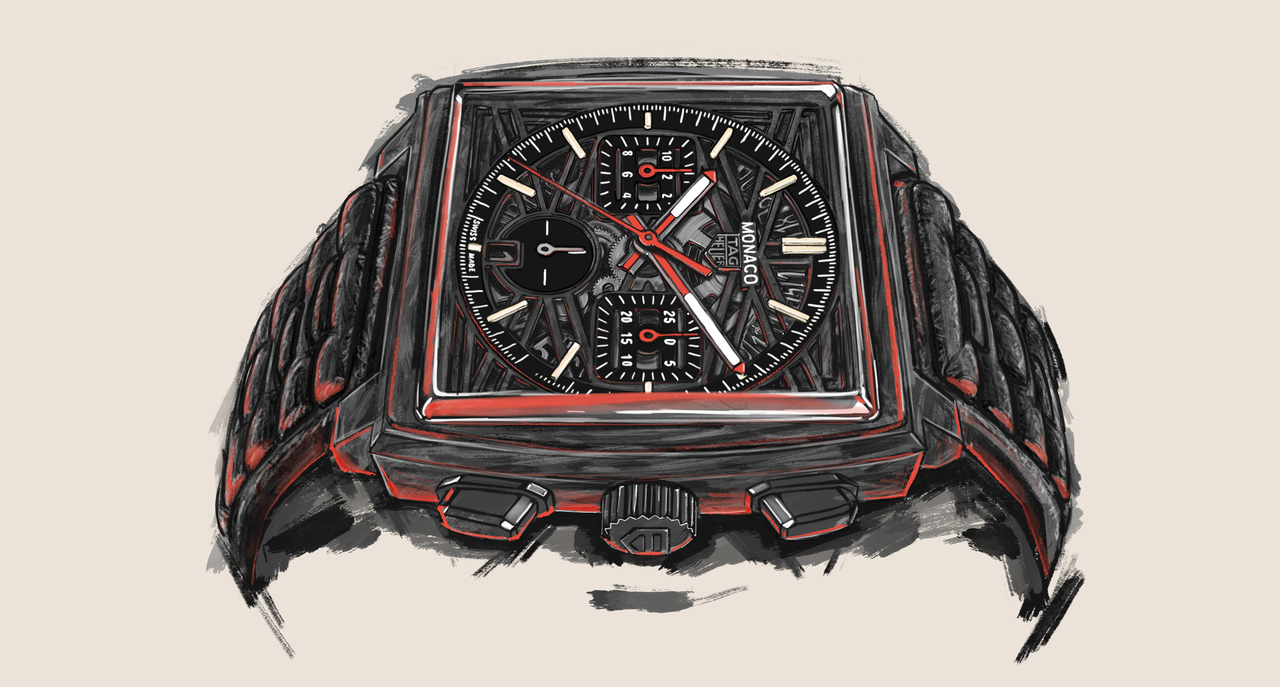 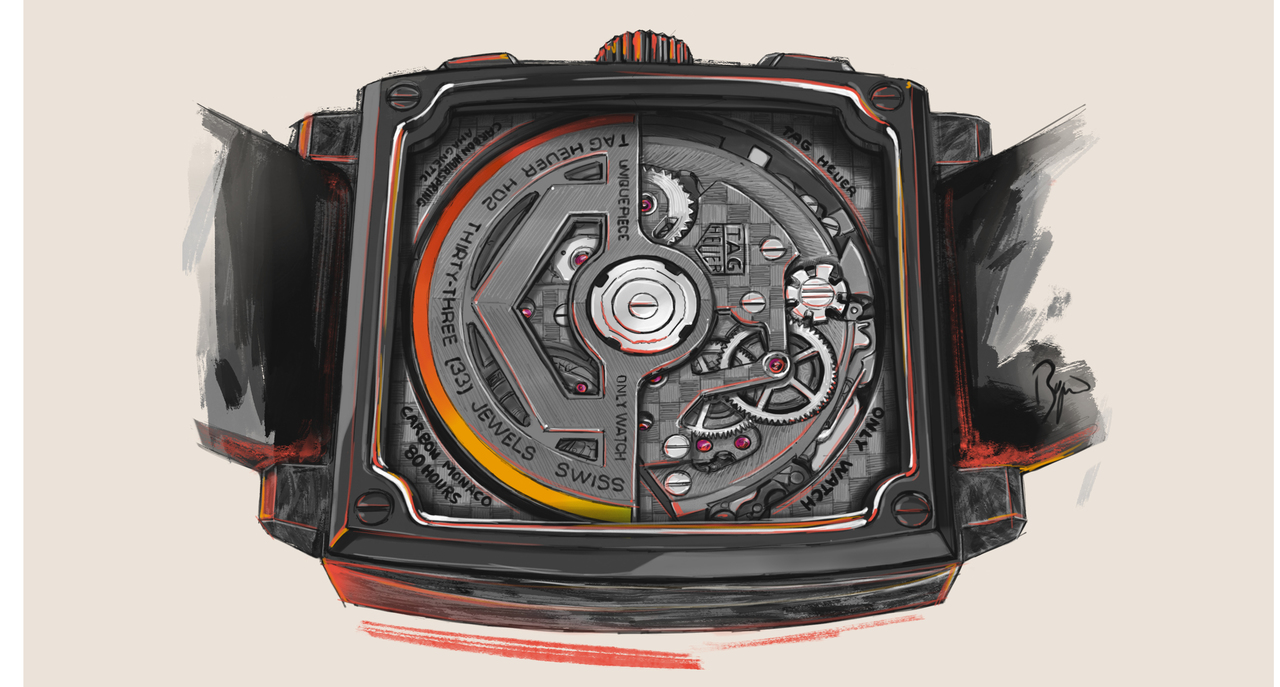 For fans of TAG Heuer, the Only Watch Carbon Monaco will have clear echoes of the legendary Monaco with a black PVD case Reference 74033N known by collectors as the "Dark Lord". It was produced in limited quantities in the mid-70s and never appeared in a Heuer catalog (as the company was called until 1985) or in any other advertisement for the company. Today it is extremely rare and highly prized.

The case of the TAG Heuer Only Watch Carbon Monaco tells the story of this special watch using state-of-the-art manufacturing techniques. It is forged in black carbon fiber, which gives it a wonderfully mysterious look. 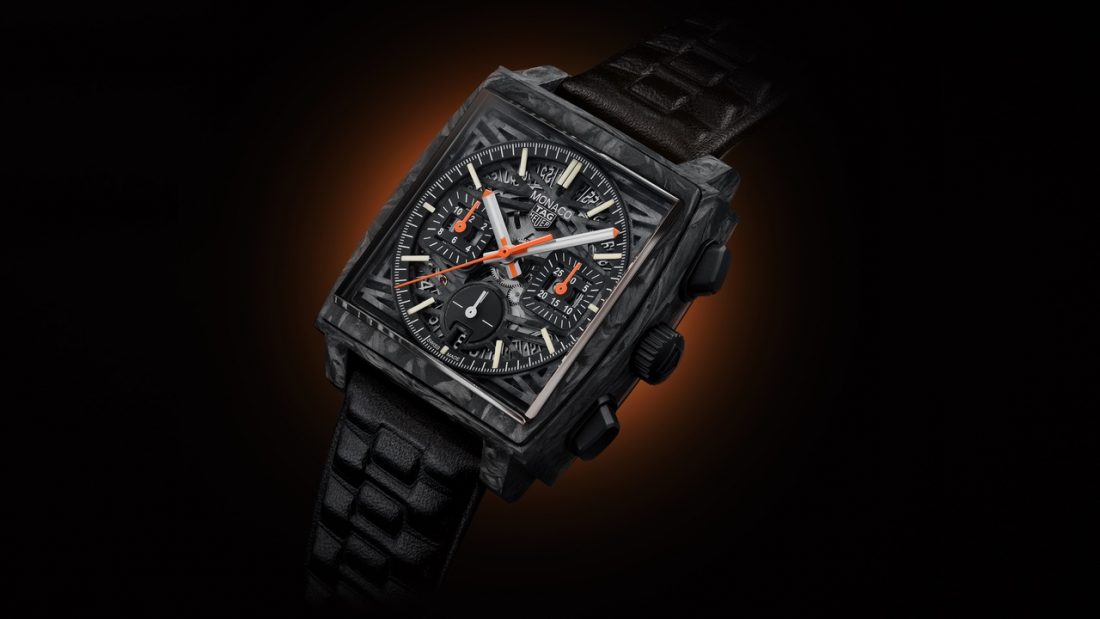 TAG Heuer has already used carbon fiber for the Monaco case with the 2018 Monaco Bamford, but this is a truly unique case that has been explicitly designed to fit the largest sapphire crystal caseback ever fitted to a Monaco. TAG Heuer engineers wanted to give the future owner of the watch an unobstructed view into its bespoke movement while ensuring that the watch remained water resistant. 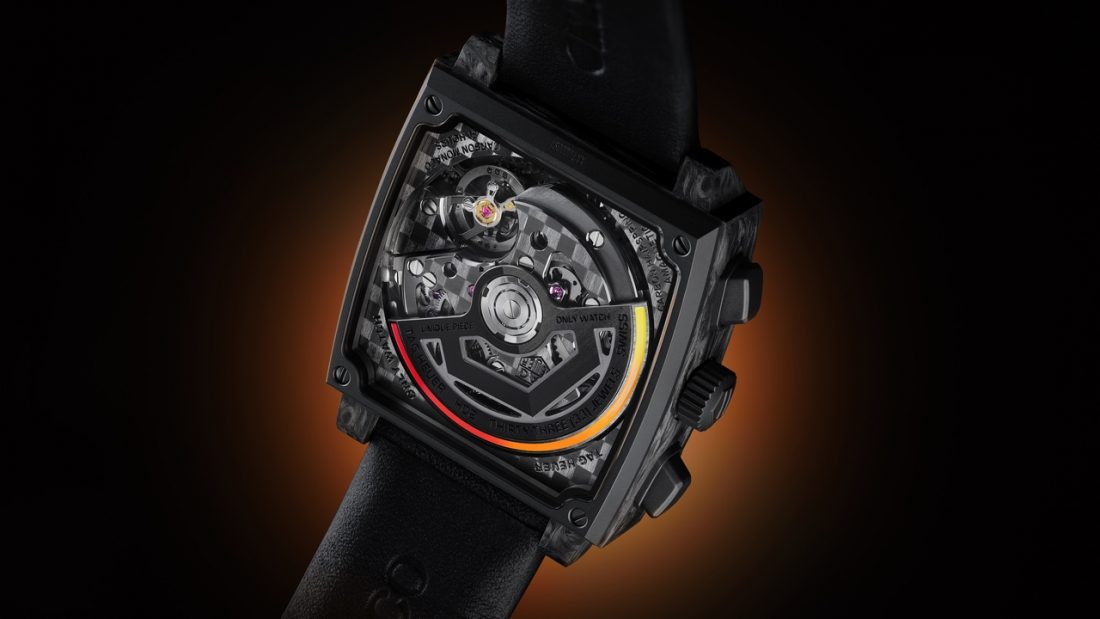 The striking skeletonized dial that gives the watch so much of its character is also made of carbon. Was created
in collaboration with TAG Heuer's longtime partner, the acclaimed dial specialists ArteCad, and is machined from a single piece of carbon fiber.
The architectural appearance of the dial was created by milling and drilling the base shape to reveal a structure that is nothing short of striking, with shapes that extend across the clock face like the pillars of a racing car, a design that makes
subtle reference to TAG Heuer's pivotal role in the evolution of modern motor sport for more than six decades.
This is where we see the earliest example of craftsmanship involved in creating this watch. Each of the dial's intricate skeletonized facets have been finished by hand using the haute anglage watchmaking technique, which gives the dial its depth and multidimensional appearance. Below these, a date wheel peeks out, as does the upper side of the movement. Typically, the top of a caliber is left blank, hidden by a solid dial. But in this case, TAG Heuer chose to finish it by hand to ensure that each element was as exceptional as possible, even if partially obscured, a decision that is symbolic of the relentless attention to detail applied to the watch. 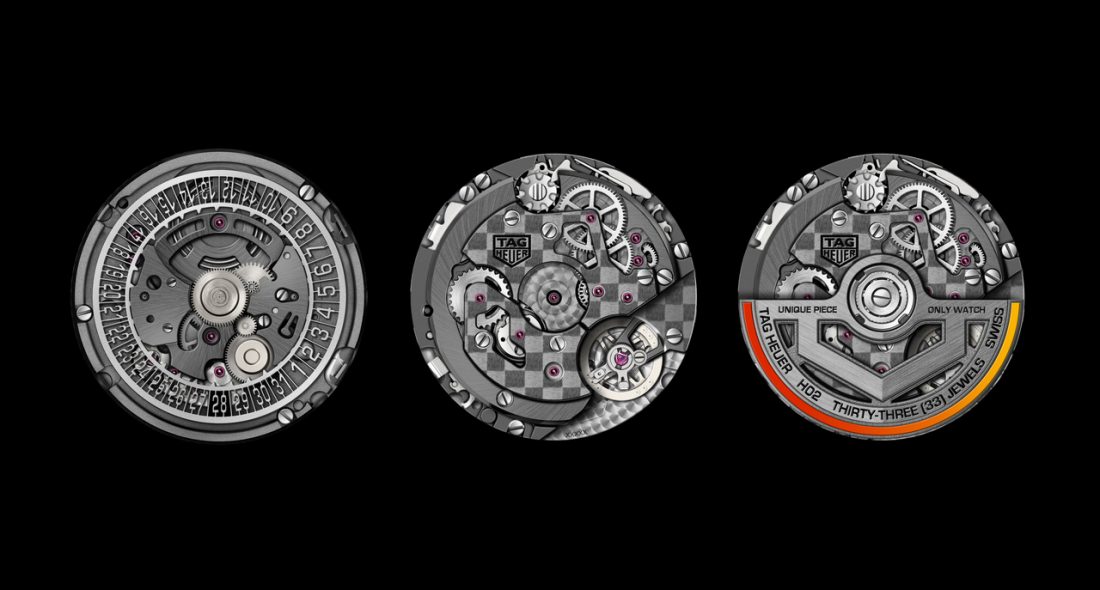 On top of the carbon dial are three black galvanized brass plates that form the chronograph watch and small seconds subdials. Orange details sampled from Only Watch 2021 make the hands stand out on the black dial, while the hour hands are individually worked by Super-LumiNova® highly luminescent beige. 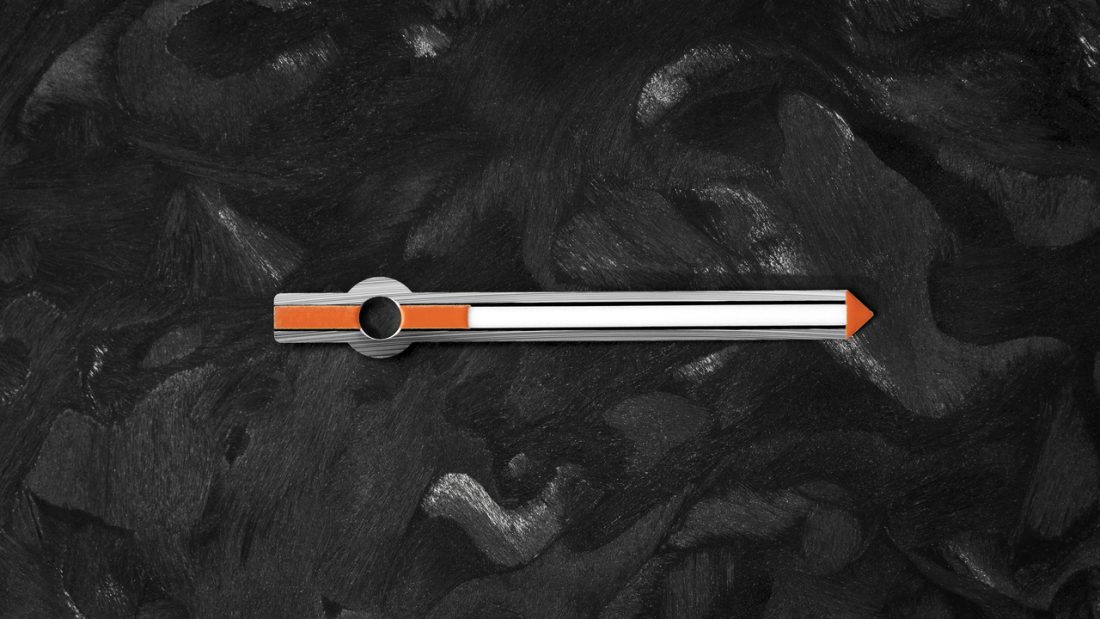 The TAG Heuer Only Watch Carbon Monaco is powered by the Swiss-made Heuer 02 automatic movement with an 80-hour power reserve.
This, however, is a unique expression of the Heuer 02, created exclusively for the occasion. Not only has the movement been beautifully decorated by hand, it also carries the innovative in-house carbon hairspring, developed by the renowned TAG Heuer Institute. The carbon hairspring offers exceptional performance in terms of anti-magnetism, impact resistance, stability in all temperature ranges and, a refined geometry for excellent chronometric performance.

The movement also features a unique oscillating weight in the shape of the TAG Heuer shield, which is not only hand finished throughout, but is also decorated with a thin orange gradient line to echo the color of the Only Watch 2021. The seamless transition. continuity from orange to yellow was made by hand, painted by the master of dials and micropainter André Martinez. André is based in Le Locle, a few kilometers from TAG Heuer's headquarters in the Swiss watchmaking town of La Chaux-de-Fonds. 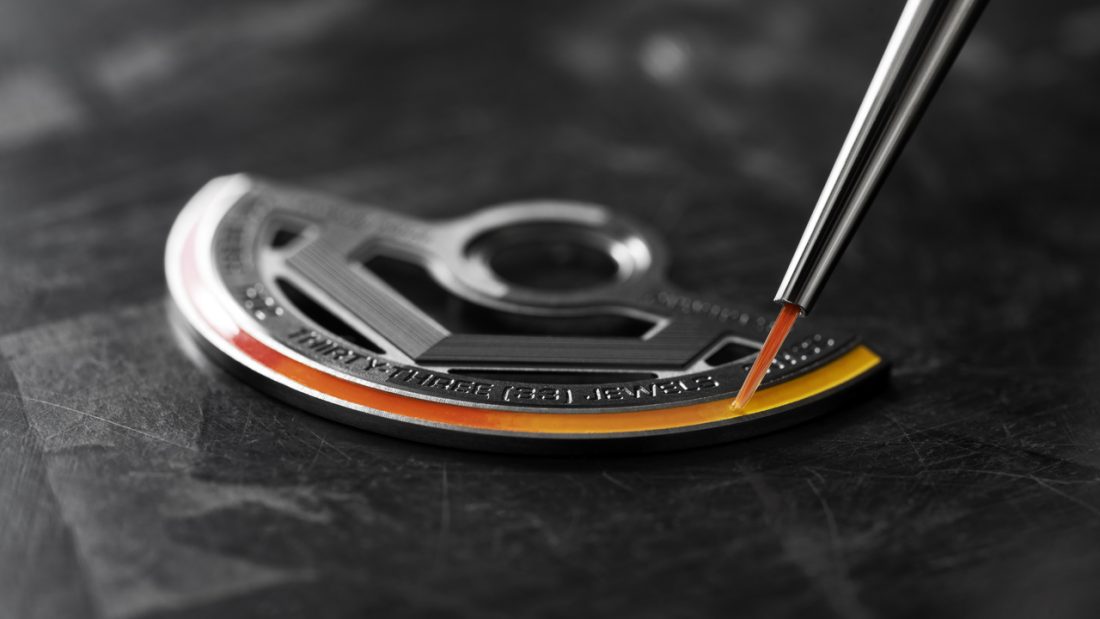 But the history of the movement does not end there. To more embody the spirit of Only Watch, TAG Heuer has decided to give the movement an exceptional level of finish and work with Artime SA, one of the leaders in the field of decorative techniques.
There are no less than 10 types of hand finishing. The most visible is the rare graté decoration. Applied by hand, this creates the checkered flag motif seen on the movement bridges and its frame, which bears further special engravings. To create an additional sense of depth, the movement also features additional hand-finished techniques including anglage, black polish, circular grain, straight grain, perlage, snail, sandblast, chevron engraving, and sunburst finish.

It took 25 hours of additional manual finishing to create this spectacular effect, producing a timepiece
worthy of Only Watch. 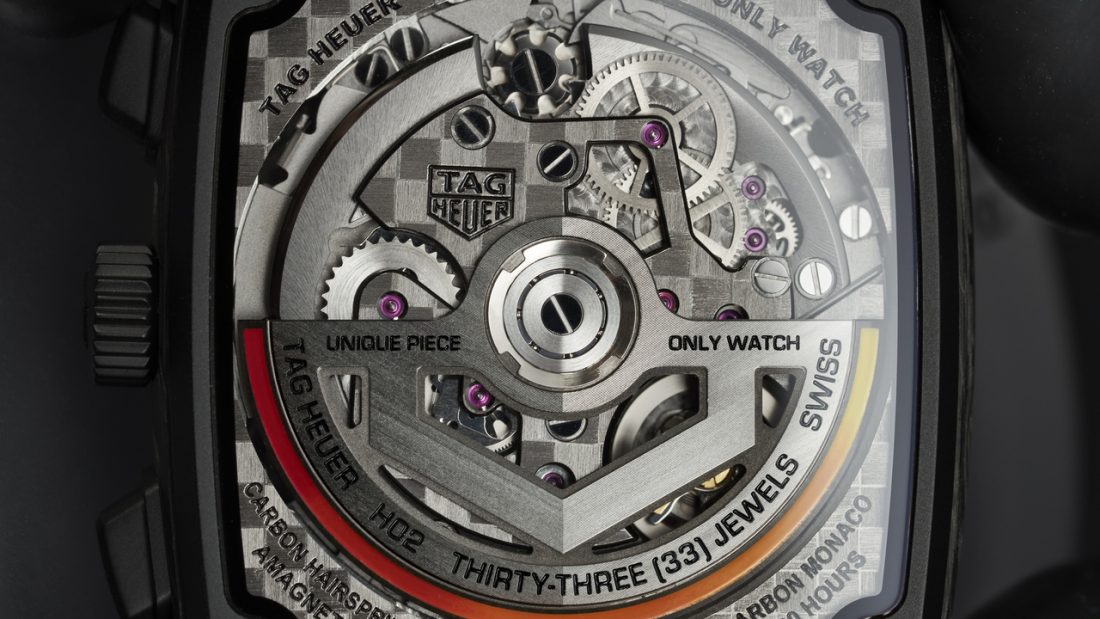 To complement this fascinating watch, TAG Heuer has created a new strap that looks like a metal bracelet but is actually leather. The bridging effect is produced using a qualified process that took months to perfect. Silicone is injected into the skin layers. This is then hot stamped with a mold in the shape of a metal link bracelet, creating the three-dimensional effect. TAG Heuer he had never used this technique on a strap before. 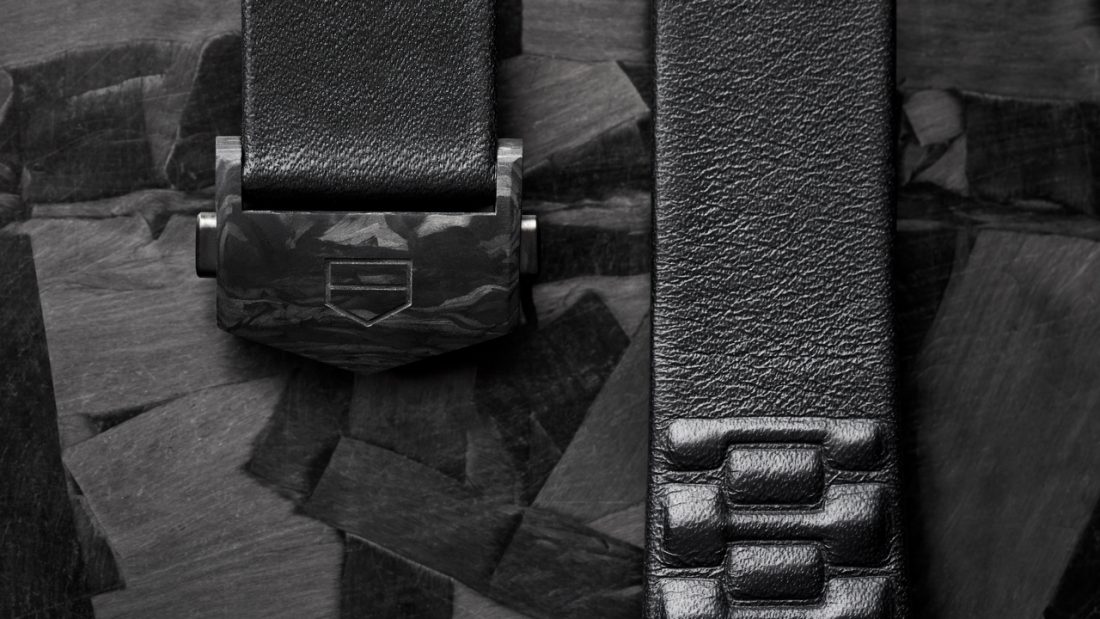 Il TAG Heuer Only Watch Carbon Monaco comes after months of development. Designers, engineers and partners have put their heart and soul into it, creating a truly exceptional timepiece, a wristwatch that brings together more than five decades of watchmaking heritage, traditions handed down from generation to generation, combined with the most advanced contemporary watchmaking and cutting-edge techniques.


There is no ads to display, Please add some