The German watch manufacturer A. Lange & Söhne threw the clock Lange 1 in 1994 along with three other models in an attempt to revive the company after it was expropriated in the aftermath of World War II and to put Germany back on the map of high-end Saxon watchmaking. The great-grandson of Ferdinand Adolph Lange, Walter Lange, he managed to make this possible. Il Lange 1, with the brand's famous oversized date and watch Zeitwerk with its digital displays with jumping hours and minutes, they are two of the most iconic watches in the catalog of A. Lange & Sohne. 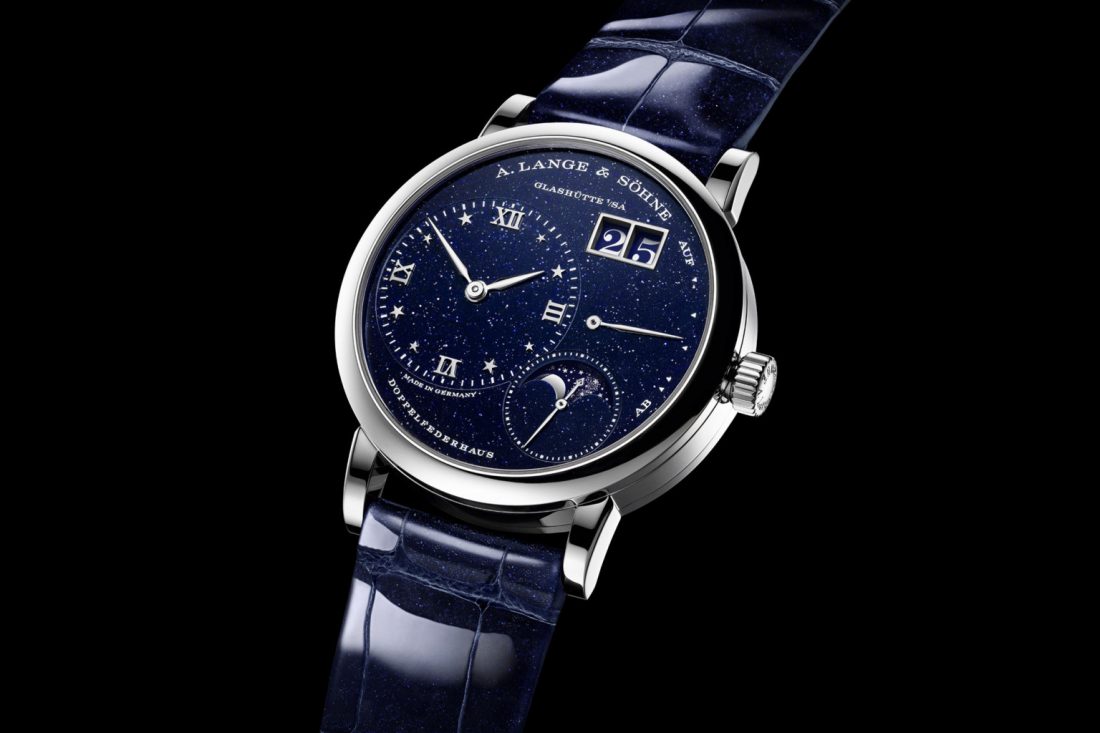 Il Lange 1 featured a large date window, an off-center hour and minute dial, a small seconds dial, and a power reserve indicator - features that still remain present after more than 25 years of production, as demonstrated by the new A. Sohne Little Lange 1 Moon Phase. The Lange 1's sub-quadrants were arranged in an unusual way, but there was a method behind this madness. The functions of the dial have been positioned according to the golden ratio, a mathematical equation believed to lead to an aesthetically pleasing and harmonious design, so the collection continues to evolve. 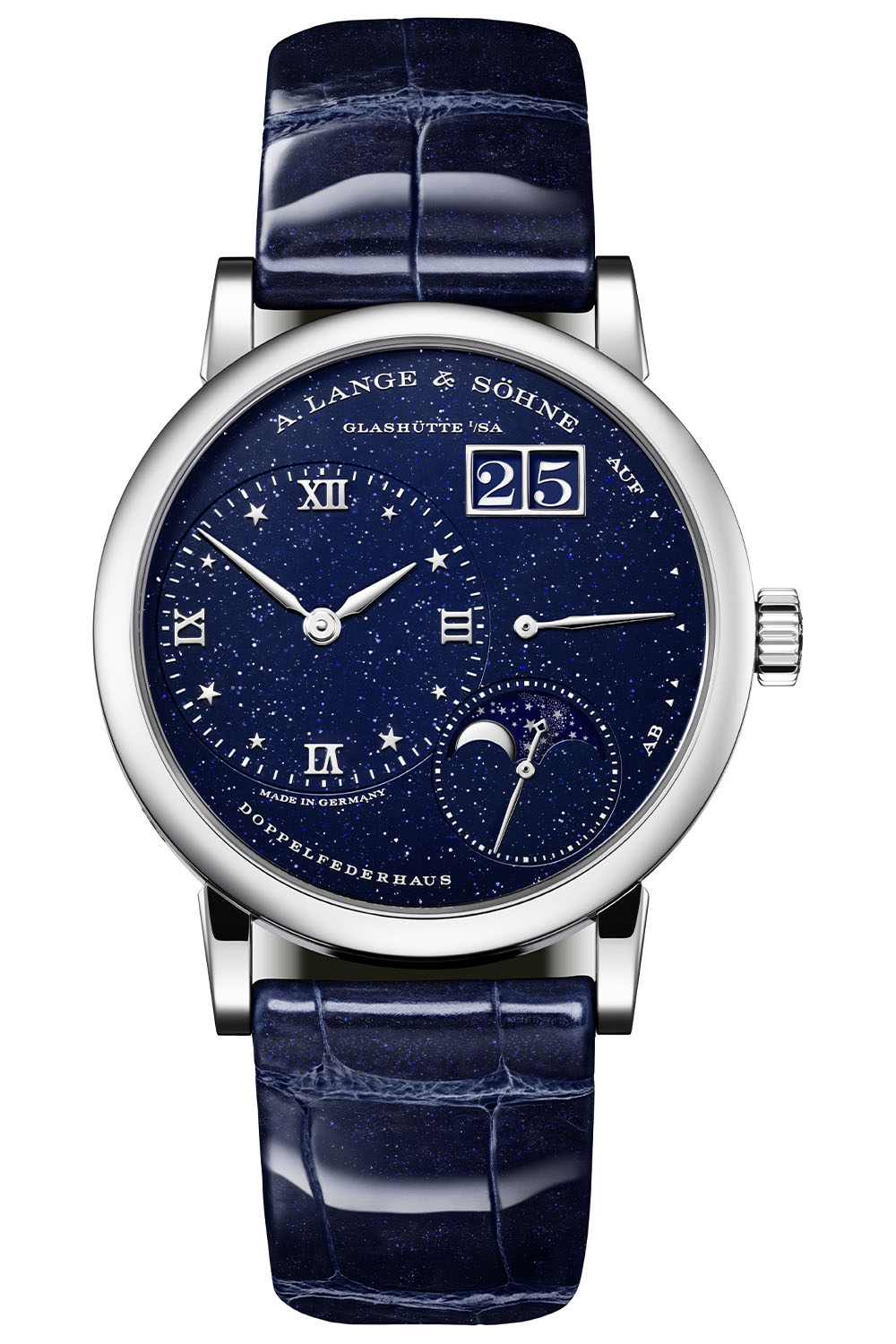 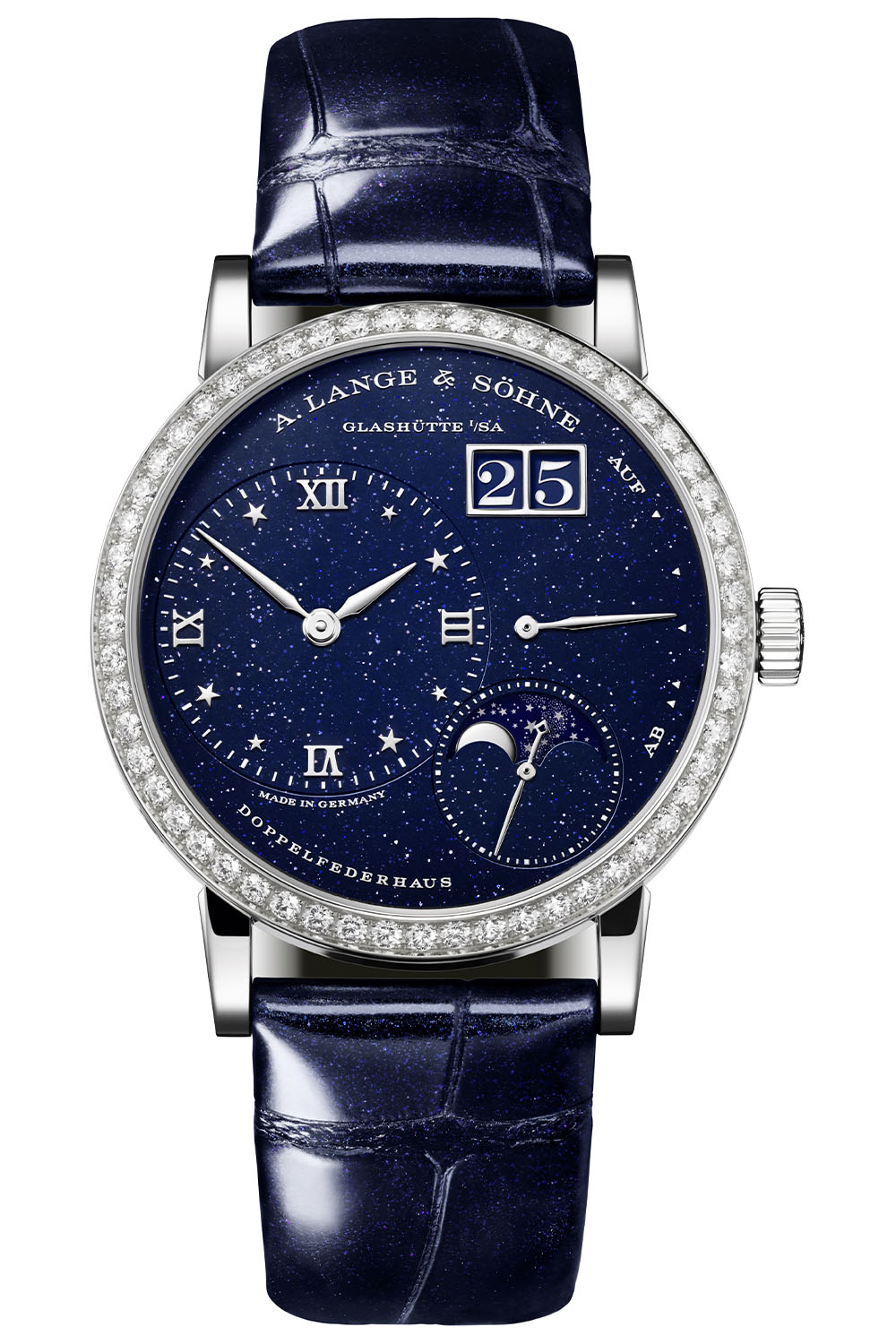 The dial of the new Little Lange 1 Moon Phase 'Gold FLux', made of solid silver and coated with a stream of dark blue gold, has copper particles that sparkle in the light, resulting in a color similar to that of a starry night sky. The hour track within the main off-center dial is a mix of star motifs and traditional Roman numerals crafted in rhodium-plated gold, as are the hands. Aligning with the 1 and 2 o'clock is the characteristic oversized date window inspired by the iconic five-minute clock of Dresden present in Opera House (photo below) of the capital and includes numbers that are approximately three times larger than standard date complication watches. This feature is located next to the power reserve indicator and shows the remaining energy of the watch's hand-wound manufacture movement. 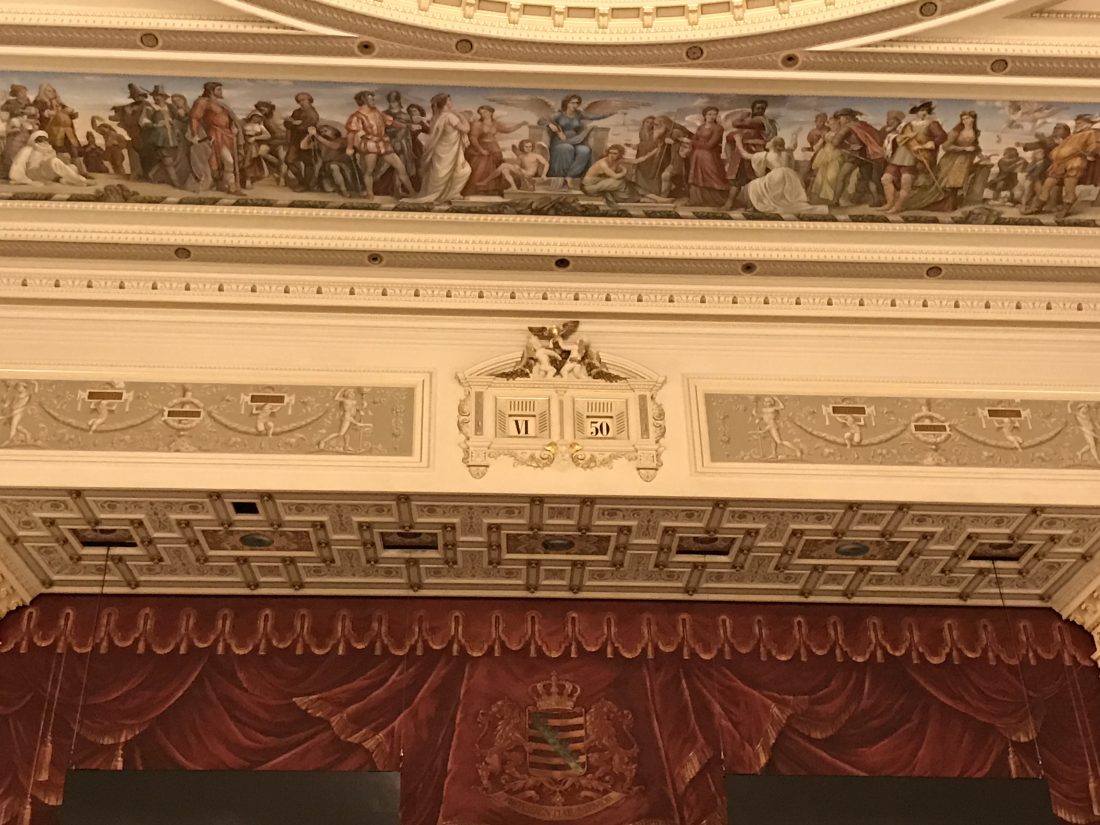 Il caliber L121.2 It is made up of 411 individual components and features 44 jewels, an anchor escapement and a double spring barrel that allows it to provide a solid 3-day power reserve. Through the back of the case, the ribbed decoration Glassworks of the movement, the gold settings, the blued steel components, the hand-engraved balance wheel and the three-quarter plate made of German silver can be admired through a sapphire crystal display. 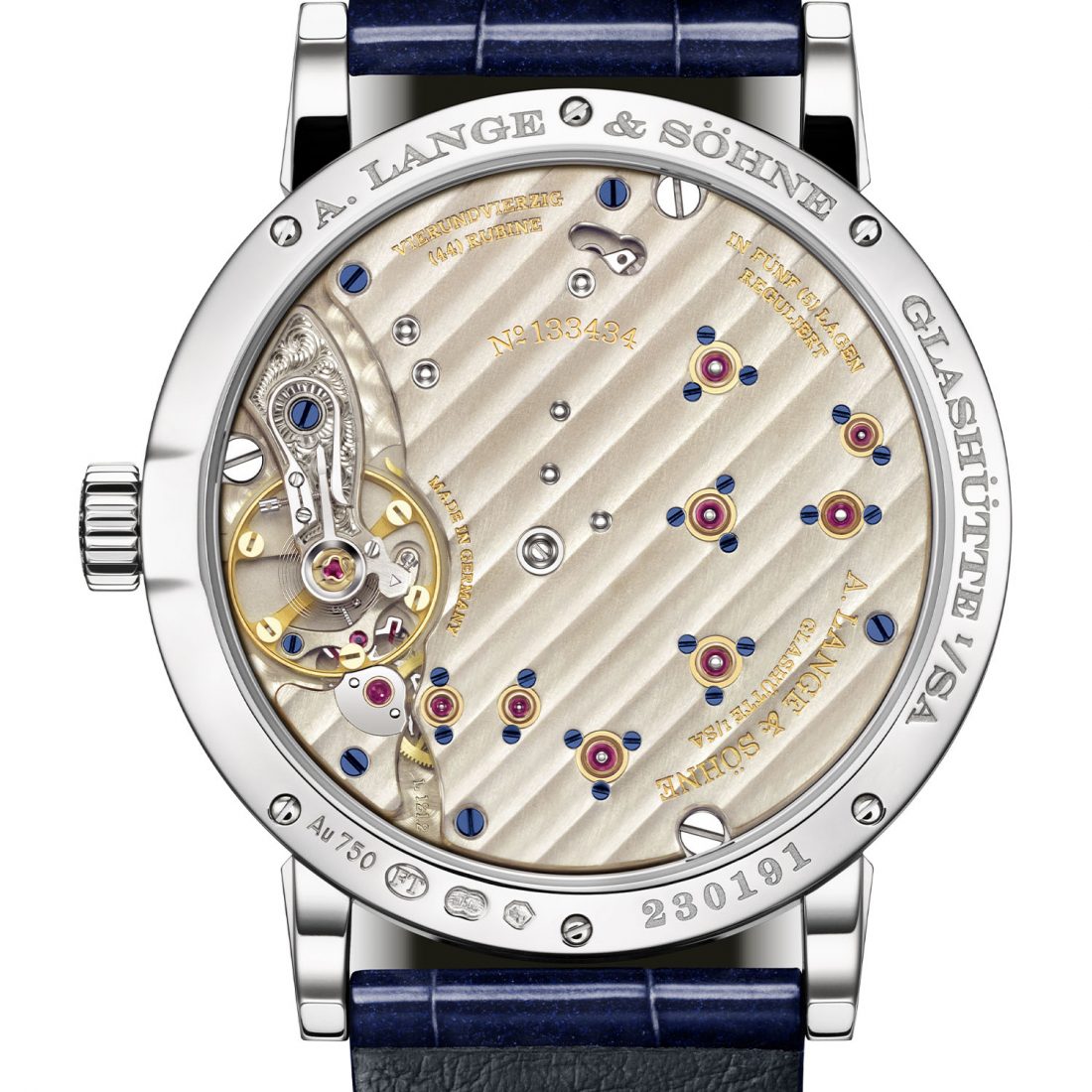 The new moon indicator A. Lange & Söhne Little Lange 1 Moon Phase it's extraordinarily accurate, especially when compared to most other moon phase complications on the market that round the cycle down to 29.5 days. The average lunar month actually lasts 29 days, 12 hours, 44 minutes and 3 seconds to be exact. A. Lange & Söhne's moon phase complication tracks the lunar cycle with an accuracy of 99.998% and requires only one correction every 122.6 years, provided the watch runs uninterrupted. The white gold lunar disc that contrasts with the dark blue gold flux dial of the Little Lange 1 is adorned with 628 stars. 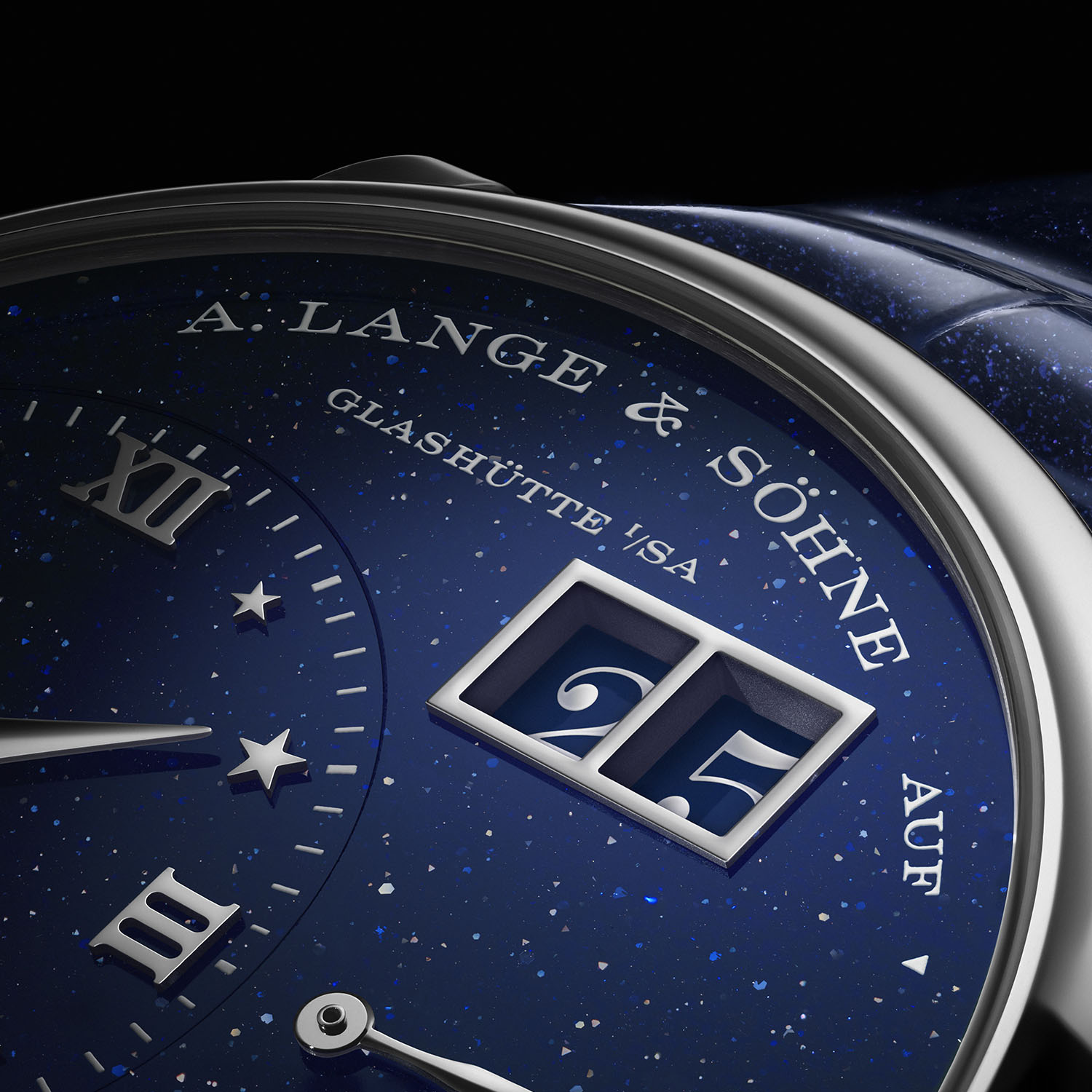 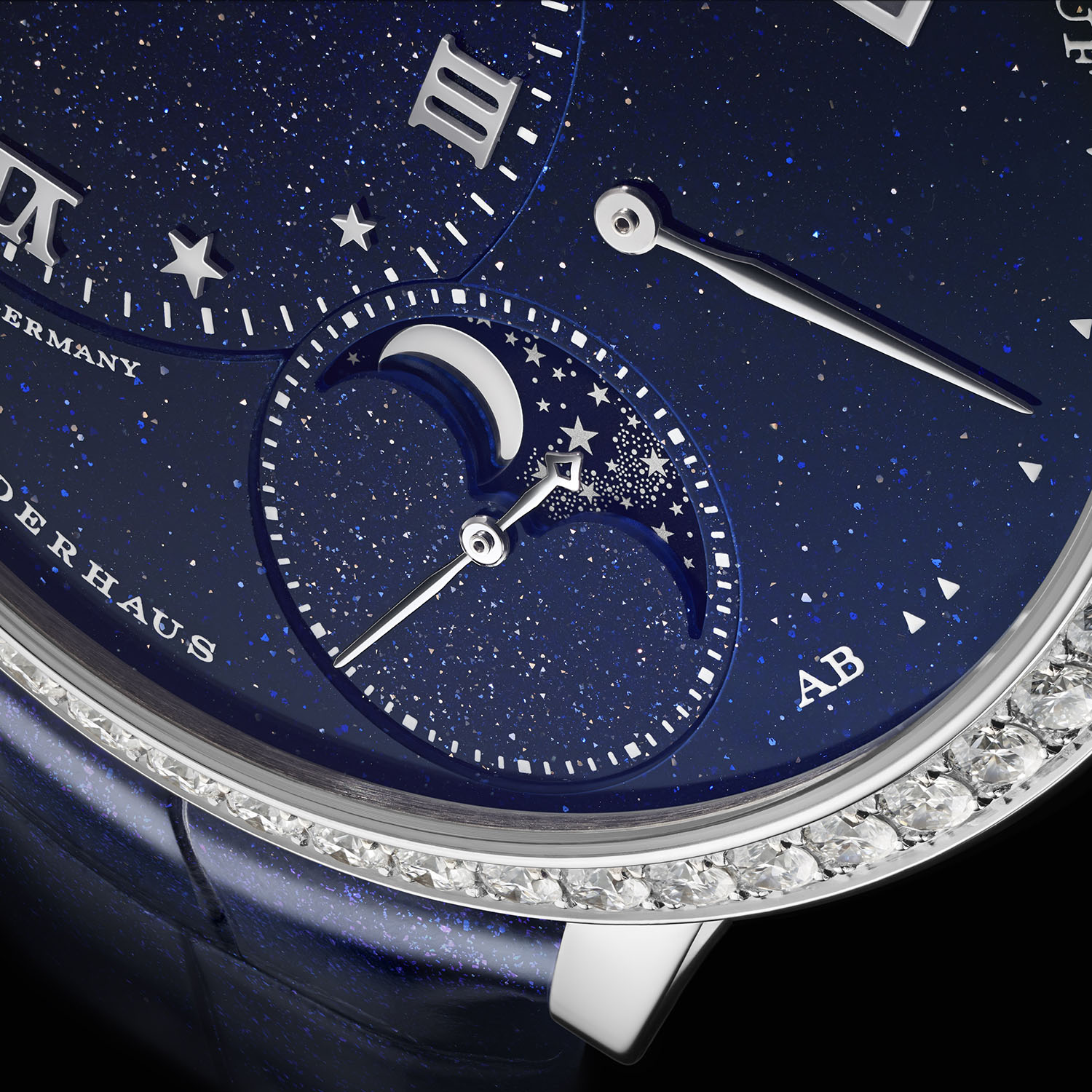 The new A. Lange & Söhne Little Lange 1 Moon Phase "Gold FLux" it is completed by a shiny blue leather strap with shimmering pigments and an 18K white gold buckle closure. The standard model is priced at NO EURO, the version with a diamond set bezel retails at 53.900 EURO. 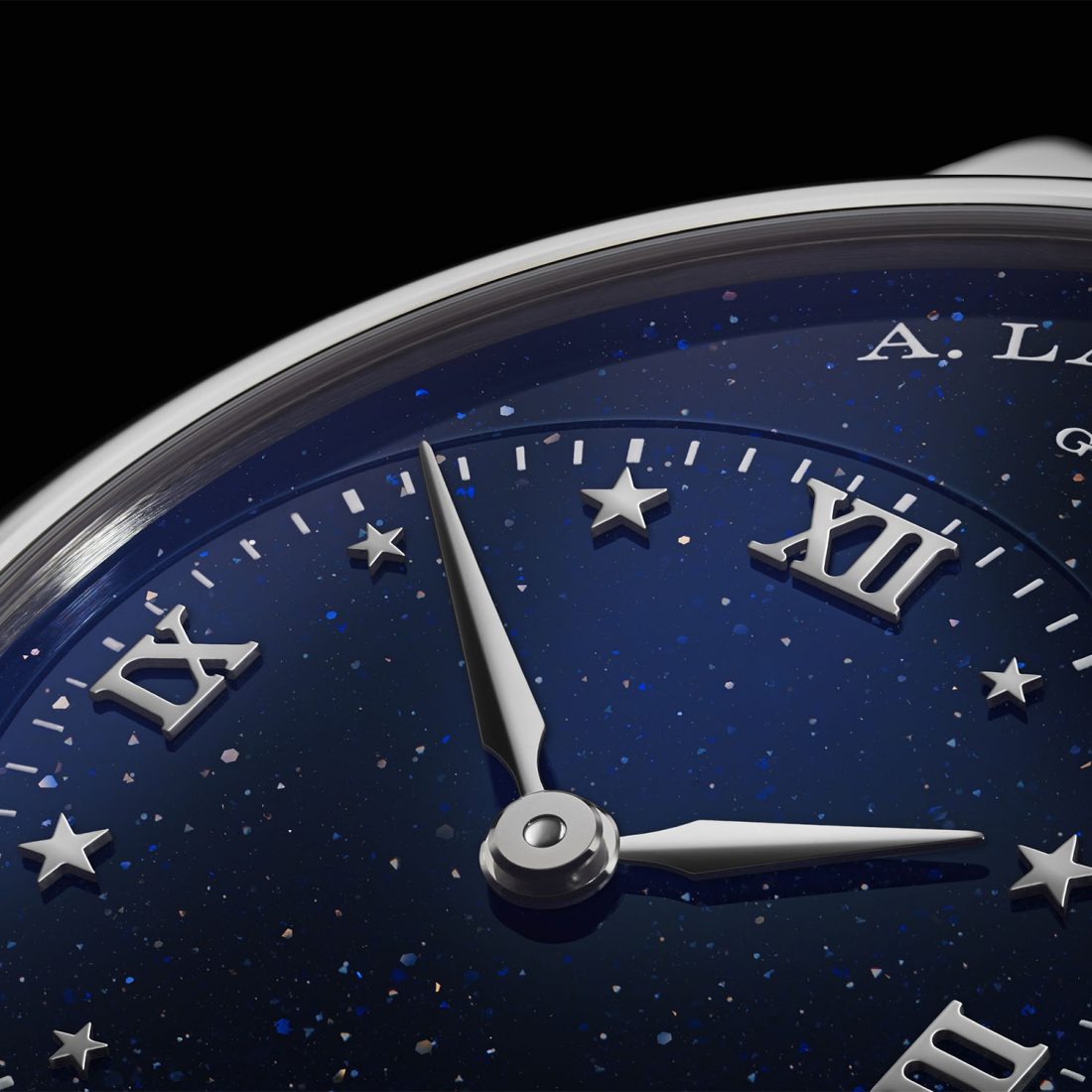