To celebrate the 1931th anniversary of the company's most iconic model, born in 2021 as a fairly simple watch, Jaeger-LeCoultre announces, for Watches & Wonders XNUMX, the Reverso Hybris Mechanica Caliber 185 Quadriptyque, a super complication limited to ten pieces in 18k white gold. Caliber 185 is the world's first four-sided watch and simultaneously the most complicated Reverso ever produced, comprising 11 complications, including a perpetual calendar, minute repeater, and synodic, draconic and anomalous cycle indications. 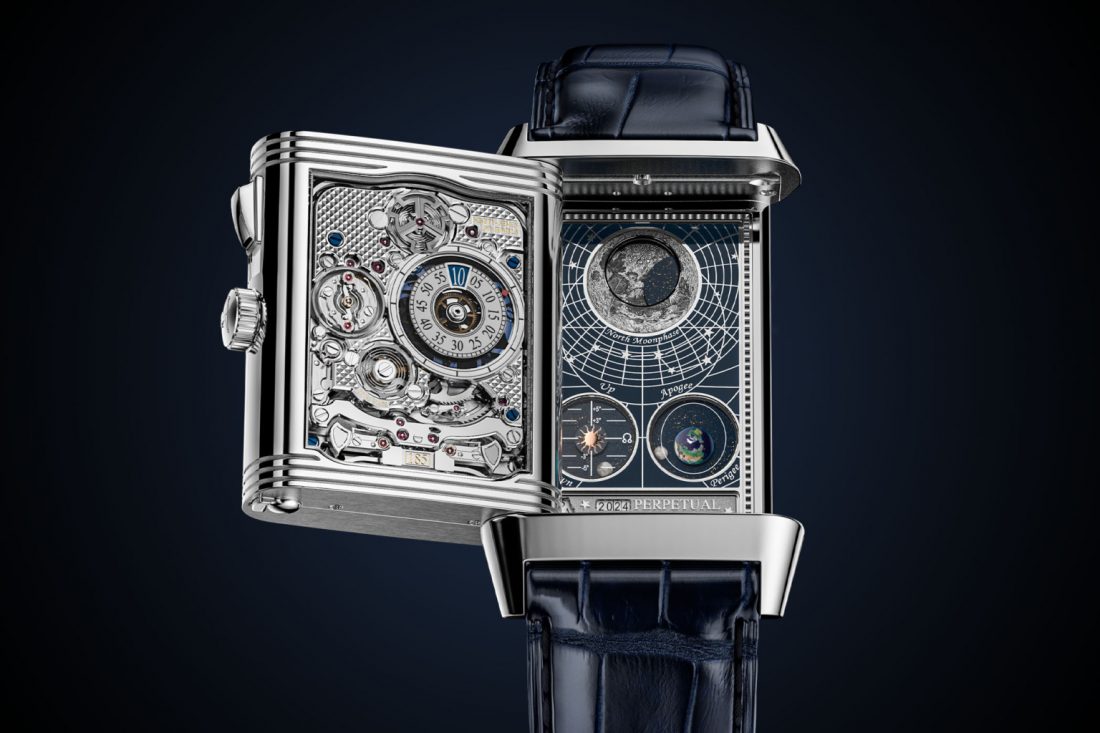 The history of the “complicated” Reverso has its roots in 1991, when the Soixantième (photo below) in commemoration of the Reverso's sixtieth anniversary. The Soixantième he brought with him a larger case known as the grande taille and was, more importantly, the first Reverso to be fitted with complications. Five even more complicated Reverso were presented later: Reverso Tourbillon, Reverso Répétition Minutes, Reverso Chronographe Rétrograde, Reverso Géographique and Reverso Quantième Perpétuel. 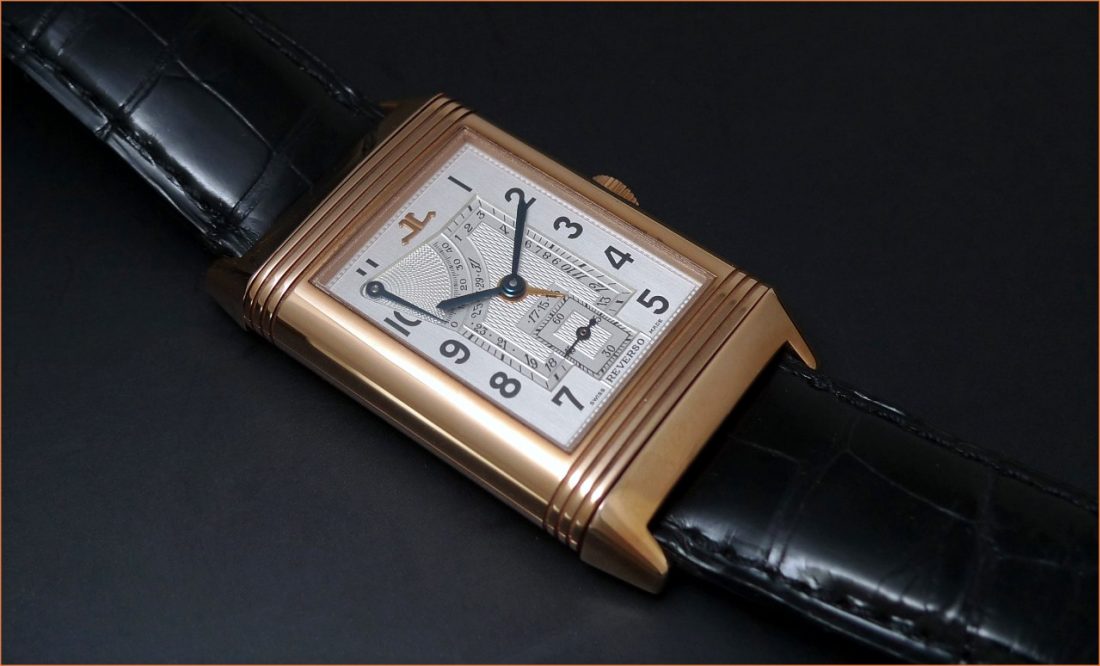 This series of watches was much more than a simple bet: it laid the foundations for a production aimed at rediscovering high complications and then redesigning them by adapting them to the small confines of the rectangular case of the Reverso. The first Duoface models were presented in the early 2000s, then came the models that house the variations of the legendary movement Septantième double barrel. But the Reverso reached its peak in 2006 with the release of the Reverso Grande Complication à Triptyque (photo below). 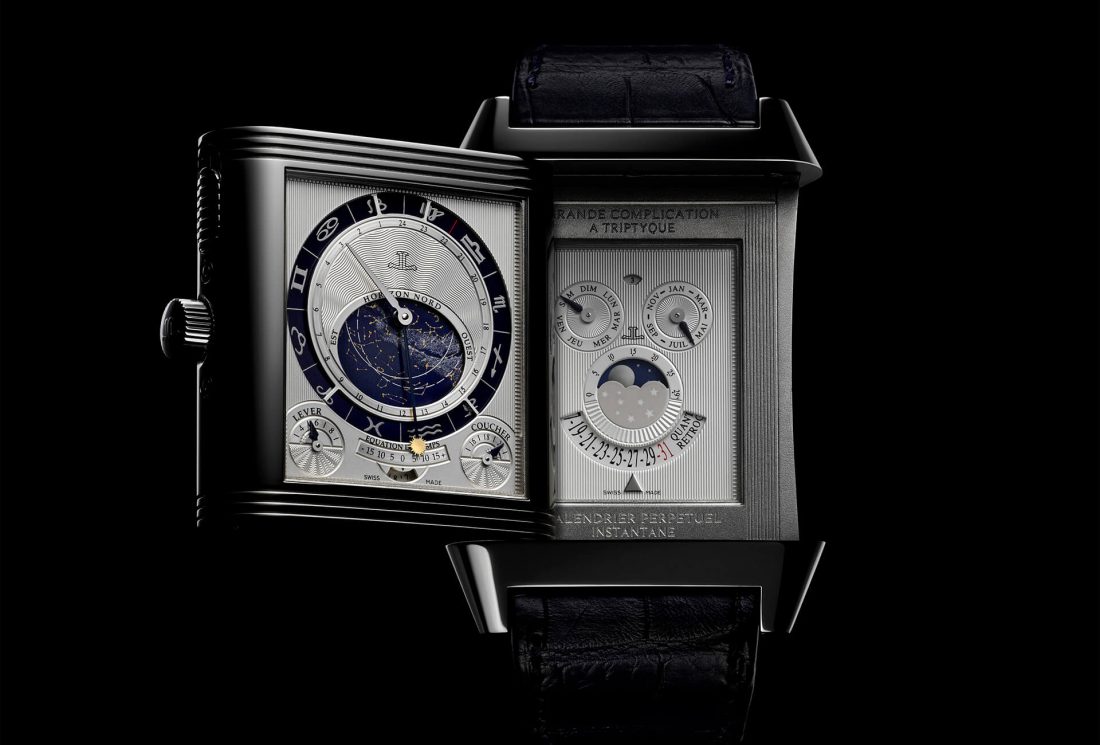 The case of the Jaeger-LeCoultre Reverso Hybris Mechanica Caliber 185 manages to maintain wearable proportions despite complications and the reversible case. It measures 51.2mm long, 31mm wide and 15.15mm thick. Despite the multi-part reversible case and frame, the 185 caliber maintains a water resistance of 30 meters. The 185 caliber is based on the innovative solution that debuted in the Triptyque: at midnight, a pin extends from the main case movement to operate a pusher in the case frame, thus advancing all indications on the four dials of the watch. 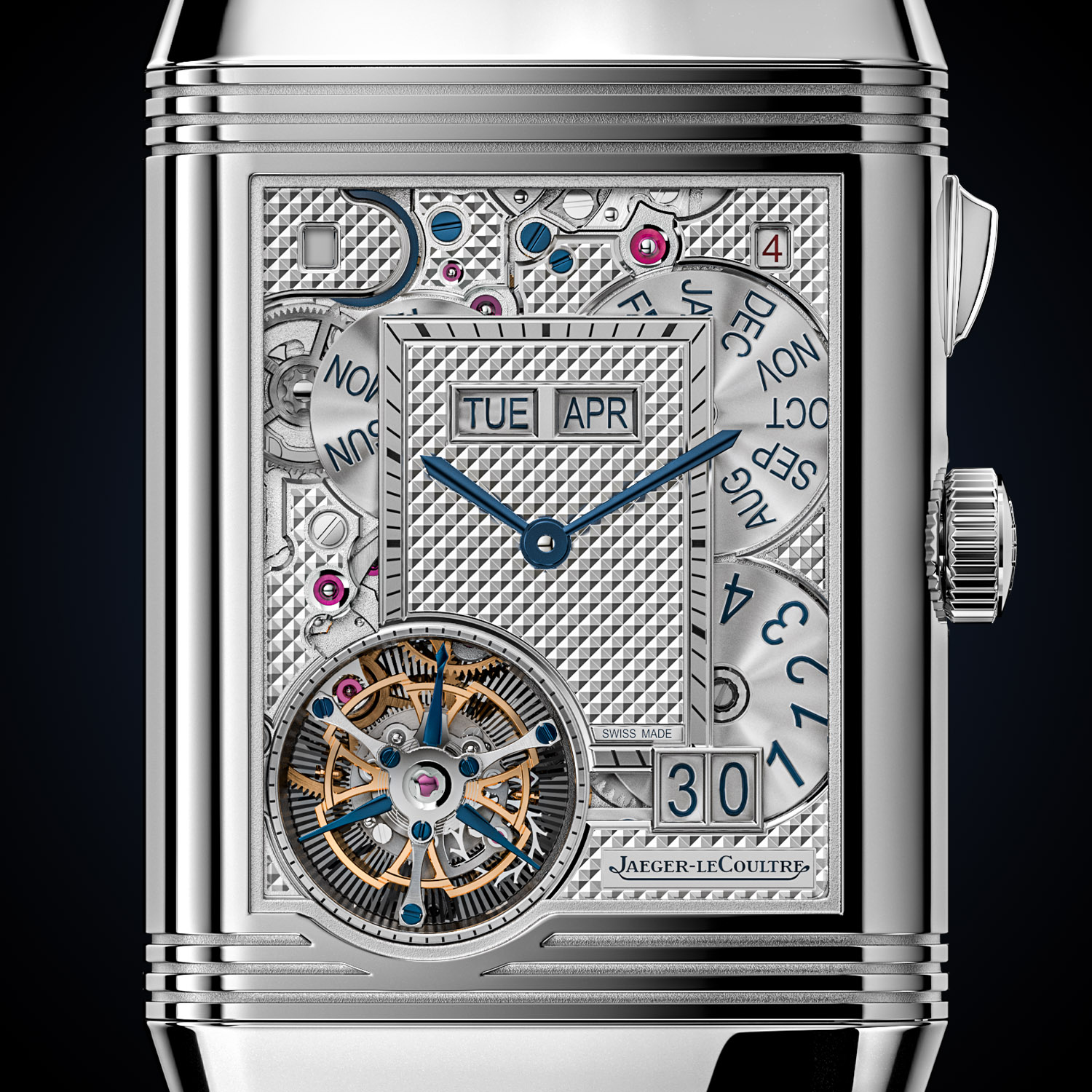 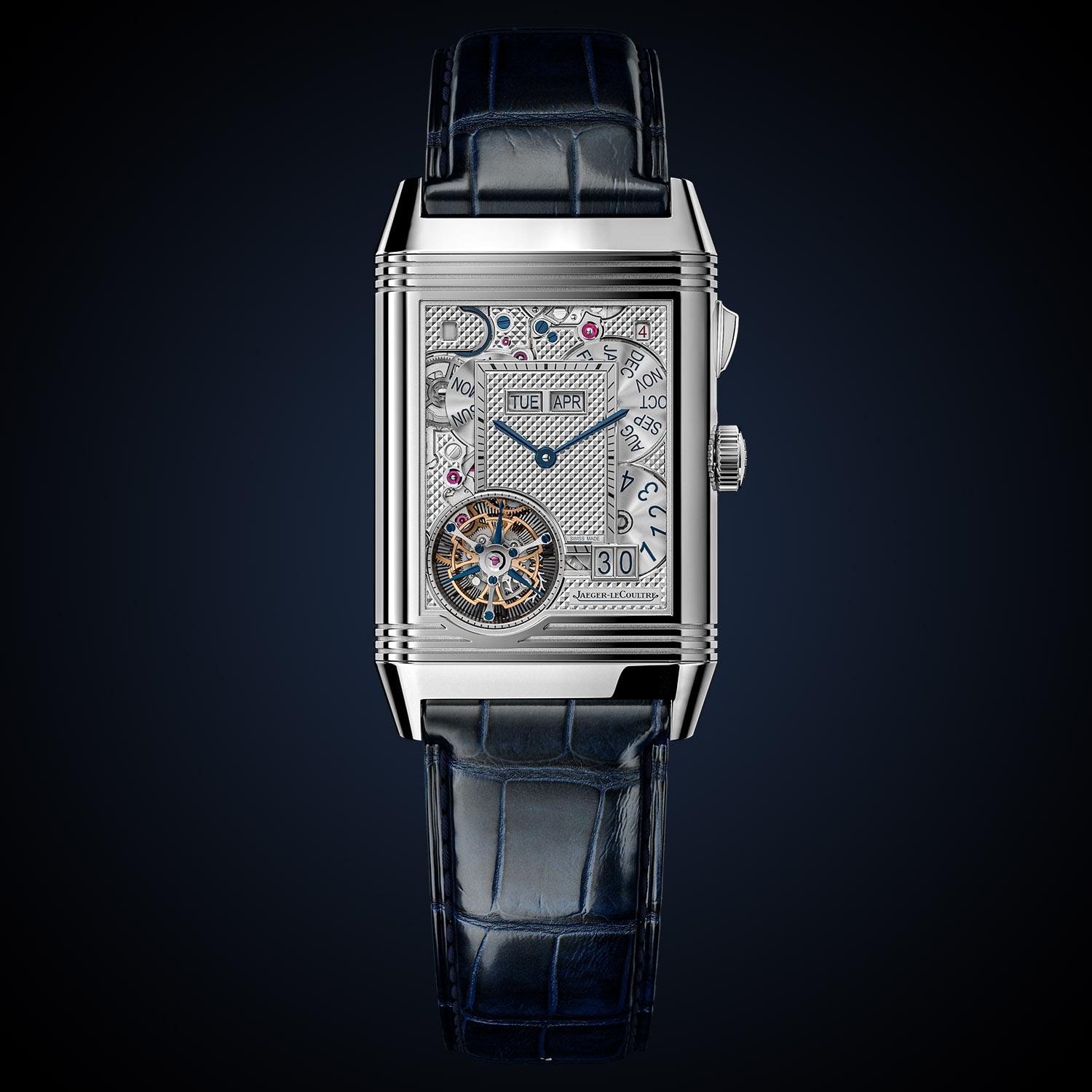 The first face of 185 caliber displays the calendar time and instant perpetual calendar indications, including the day and month windows at 12 o'clock and the two-digit date at 5 o'clock. All perpetual calendar indications jump to midnight, hence the nickname "instant ". The leap year indicator is discreetly hidden in the periphery of the dial at what traditionally would be the hour 1. At 7 o'clock, in a large opening extending into the lower part of the case, is the one-minute flying tourbillon which it also acts as a running seconds indicator. The entire dial is lathe cut with a studded or motif Clou de Paris, then galvanized in a metallic silver color. The dial was also partially skeletonized to reveal the day, month and date wheels. 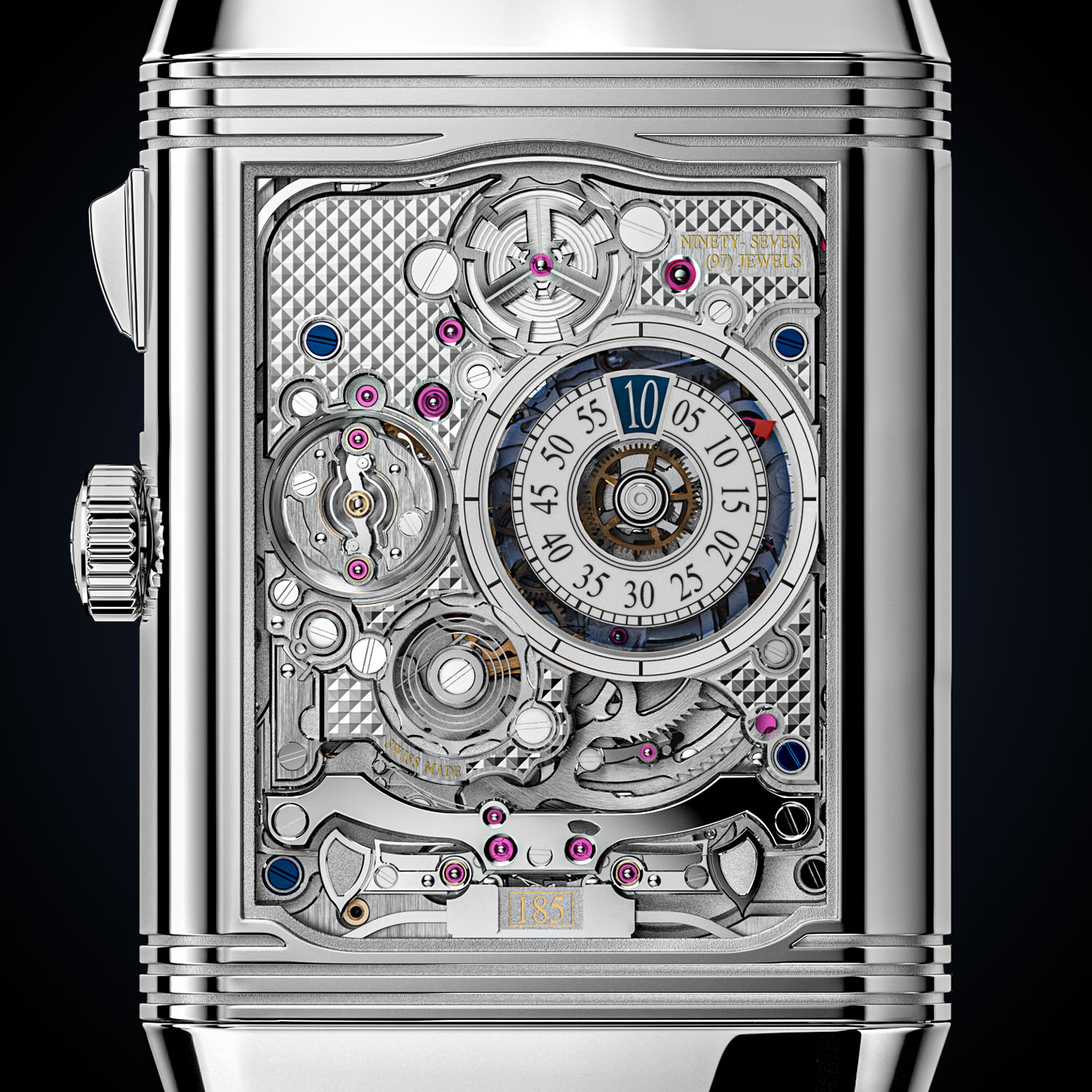 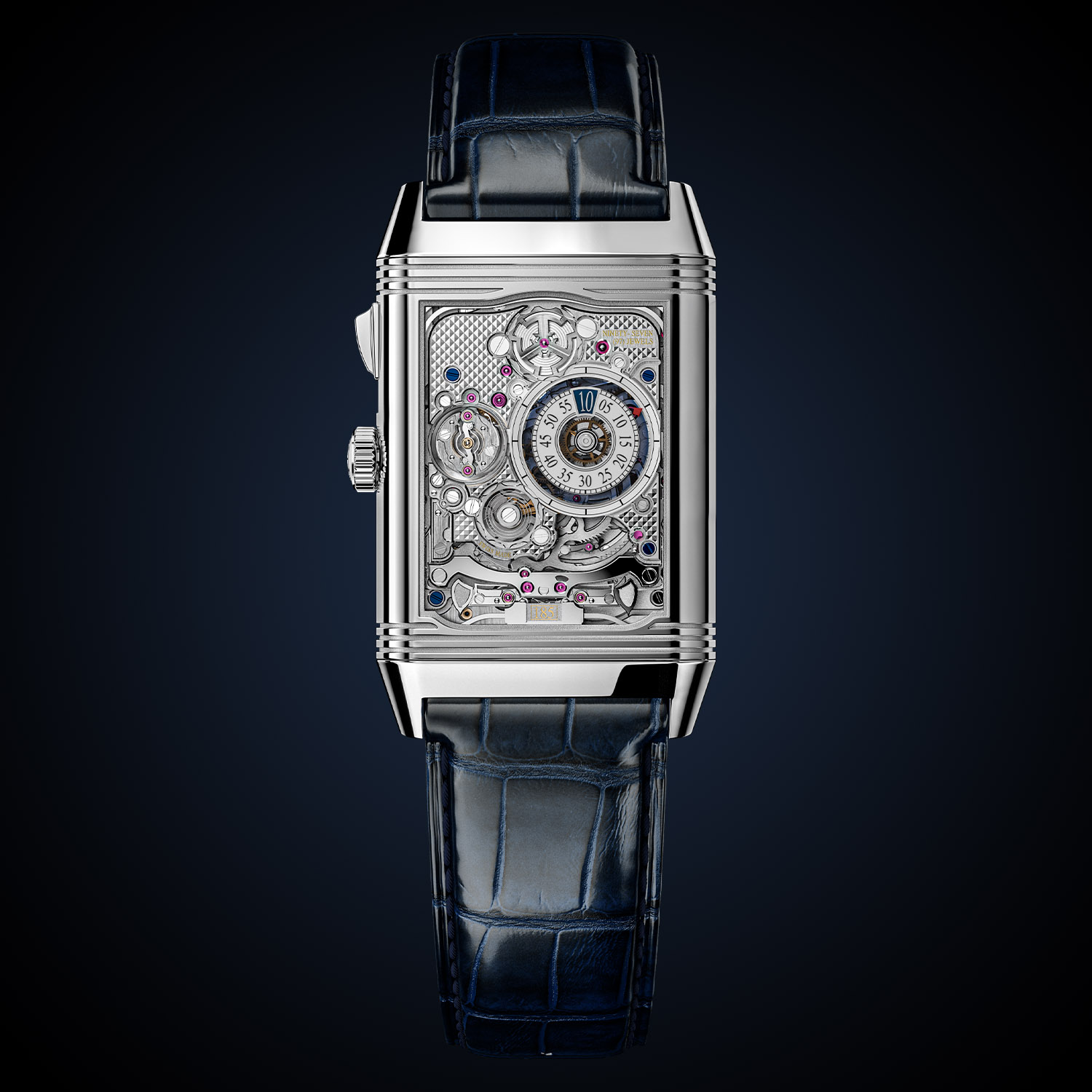 The second face, also cut with a guilloche pattern Clou de Paris, has been more carefully skeletonized to reveal the minute repeater mechanism, operated via the trigger on the side of the case, including the centrifugal adjuster at 9 o'clock and the racks of the striking mechanism between 5 and 7 o'clock. civil time is again displayed on this dial, this time in an unorthodox way: the digital "jump" hours are displayed superimposed on a white minute track, around which a smoky sapphire disc rotates with a red pointer to display the minutes. Across the entire width of the movement there is a fully mirror-polished bridge that supports the minute repeater mechanism, below which the trebuchet hammers and the chime mechanism gongs are visible. The minute repeater features several proprietary technologies JLC: the gongs are attached directly to the crystal itself, first seen in the Master Minute Repeater Antoine LeCoultre Part 2005 (picture below), which results in clearer and louder sound. Debuting in the Caliber 185 is a new system that eliminates the pauses traditionally heard between groups of minute repeater chimes, and particularly prominent in cases where no fourths are played. 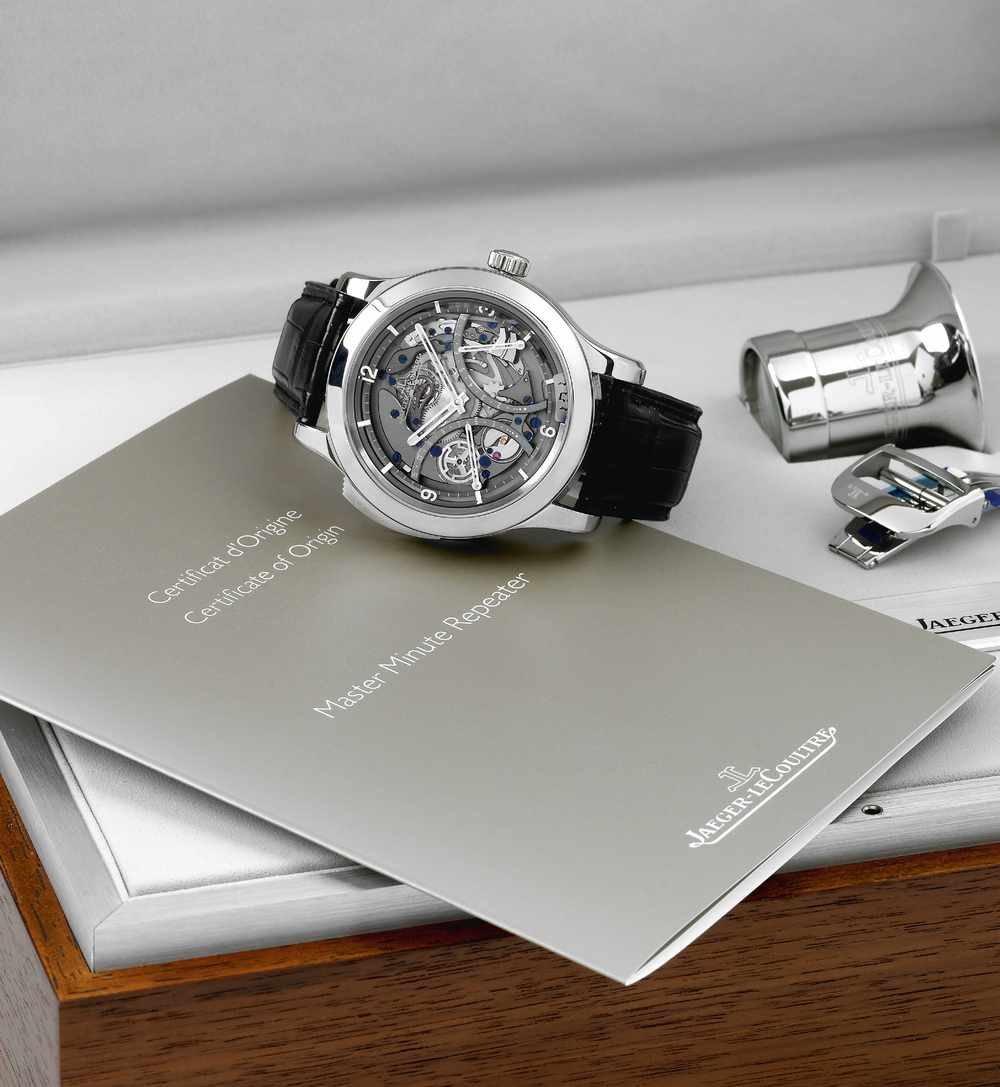 The third face appears on the inside of the Reverso case frame. For the first time in the history of watchmaking, the synodic, draconic and anomalistic cycles are displayed in a single clock. The opening at 12 o'clock shows a laser-engraved moon that is progressively revealed and covered, corresponding to the synodic cycle seen from the northern hemisphere. 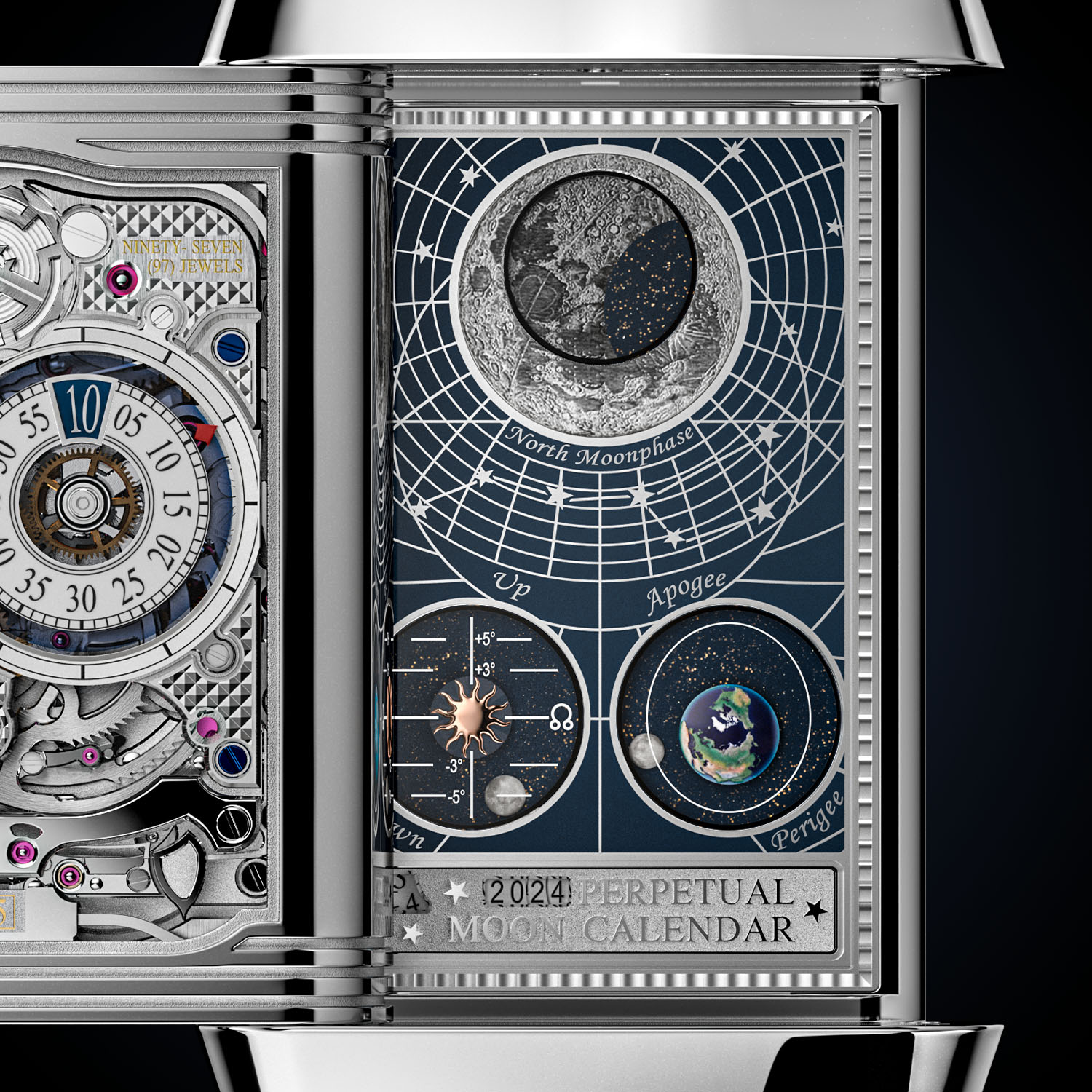 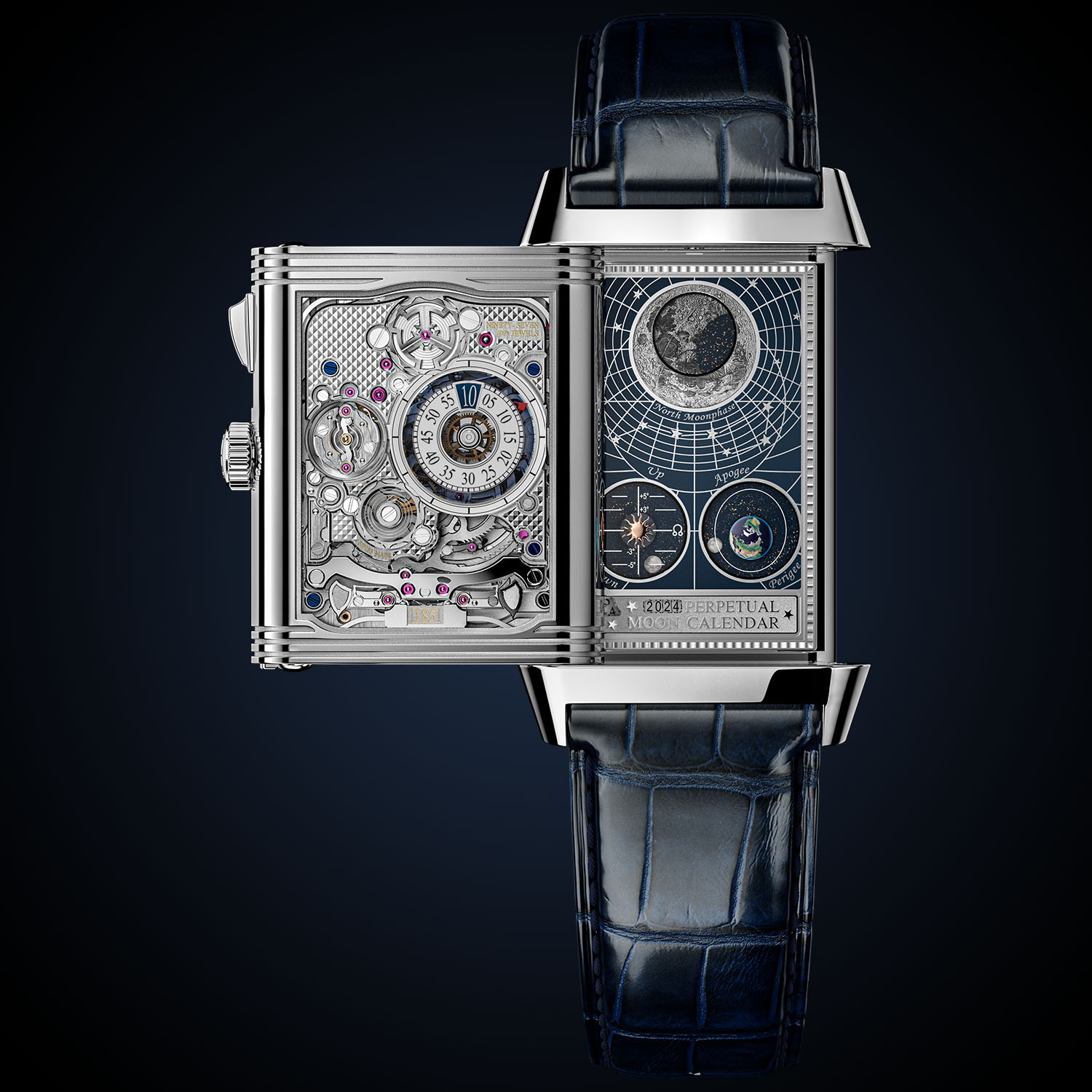 The display on the left side of the lower half of the dial shows the draconic cycle, which indicates the intersection of the orbit of the Moon with that of the Earth around the Sun. If the counter of the Moon and the Sun are horizontally aligned, the Moon, the Earth and the Sun are all on the same plane. Also, if the Moon is in the new or full moon phase during this alignment, an eclipse event occurs on Earth. To the right of the draconic cycle, a representation of the Moon traces an elliptical orbit around an enameled hemispherical representation of the Earth. This screen shows the anomalous cycle or the cycle of varying distances between the Earth and the Moon. When the Moon is in its full phase near its perigee, at the closest point to the Earth, the event known as the supermoon occurs. 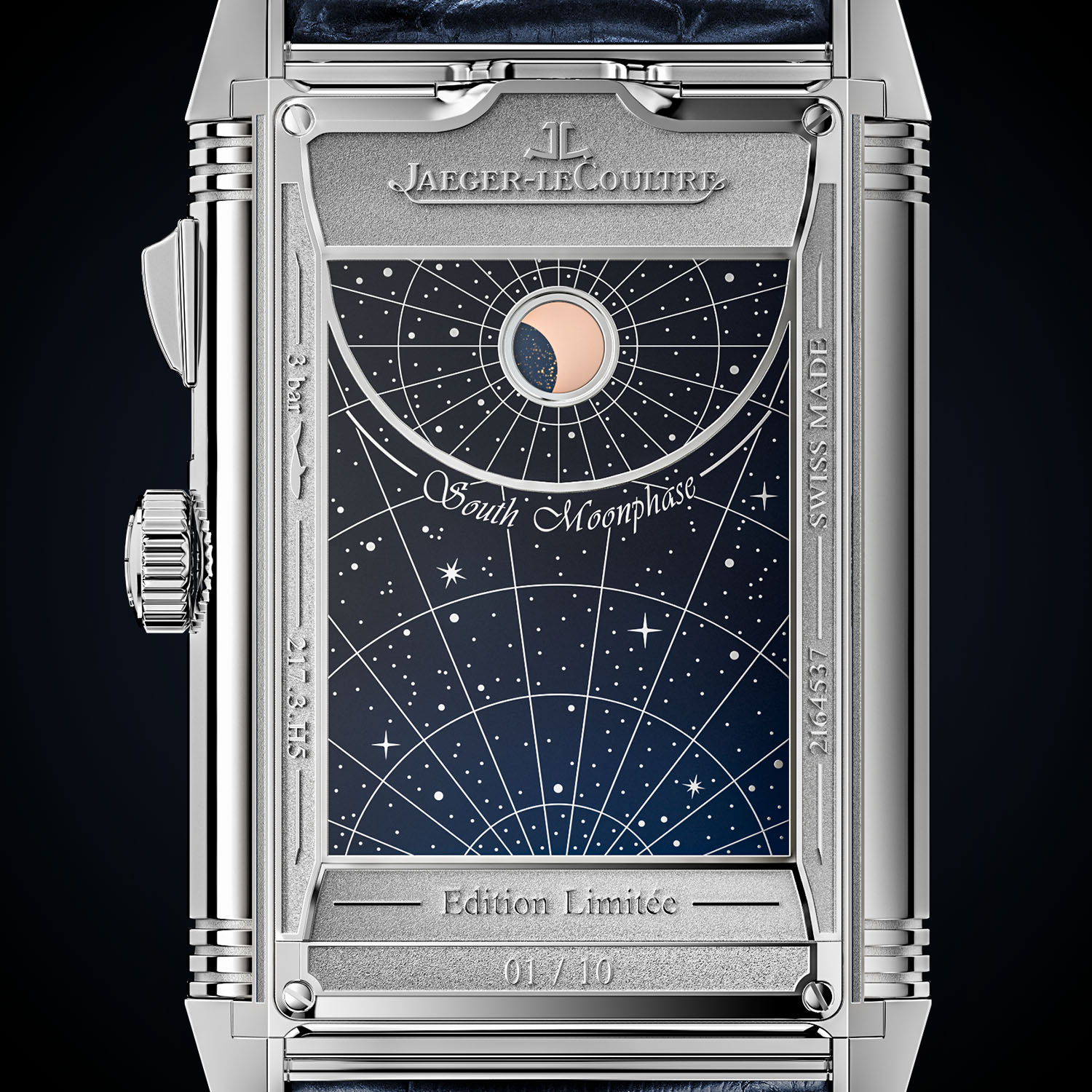 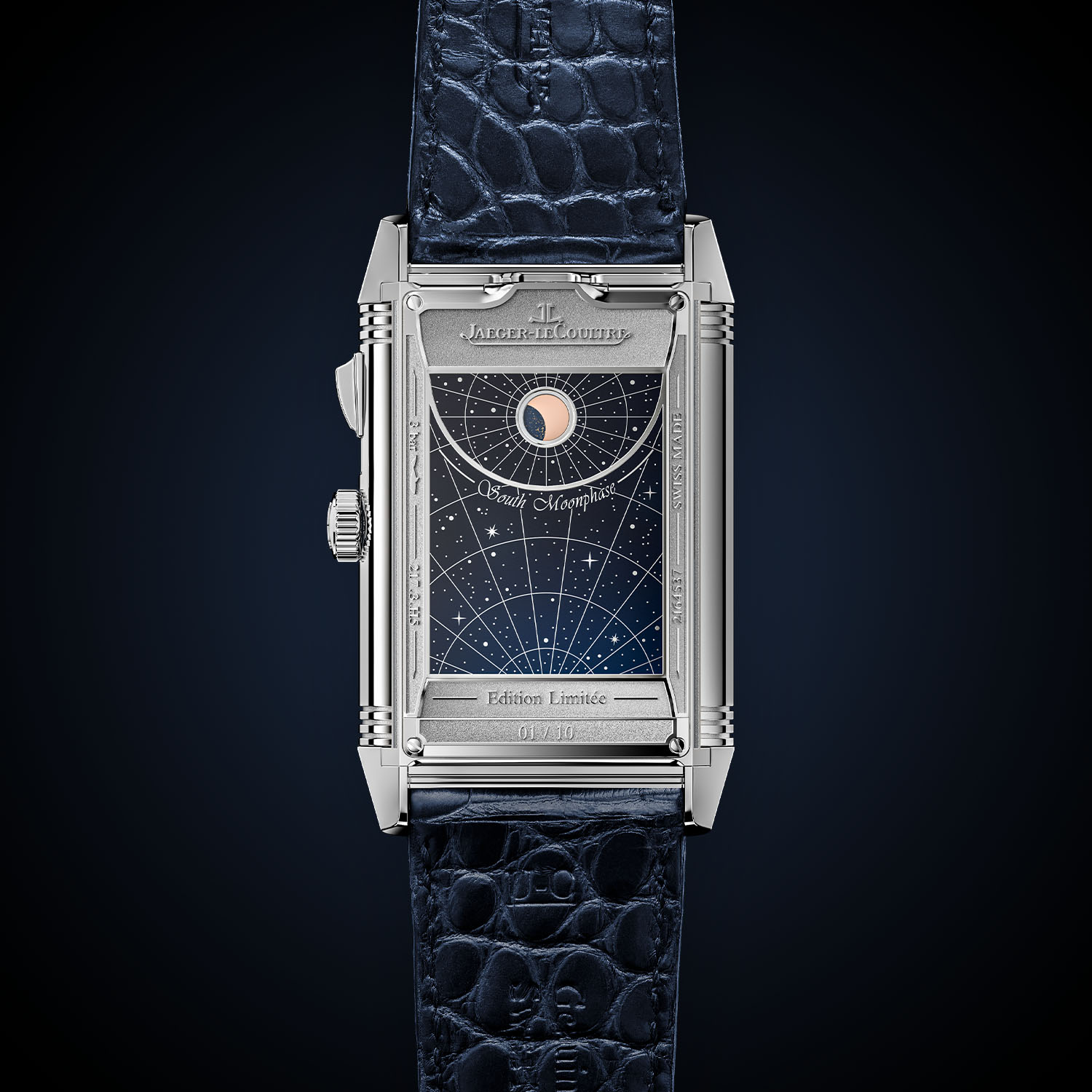 The fourth facefinally, or the “caseback” of Caliber 185, shows the age of the Moon as seen from the southern hemisphere.

Il 185 caliber comes with a presentation box with an integrated mechanism that allows the owner to correct all calendar and astronomical displays of the watch after it has been left behind for a couple of days. The box itself features a two-setting crown: the watch is placed in a bezel inside the box, the crown on the box is used to set the number of days that have elapsed since the watch was last worn , then the crown is pulled to the second position, allowing for quick adjustment of all calendar and astronomical complications.

The new Jaeger-LeCoultre Reverso Hybris Mechanica Caliber 185 Quadriptyque it is a practical watch, to be worn every day and is the maximum expression of the Reverso's heritage. Limited to 10 pieces, the price is provided on request only (expected around 1.400.000 EURO). 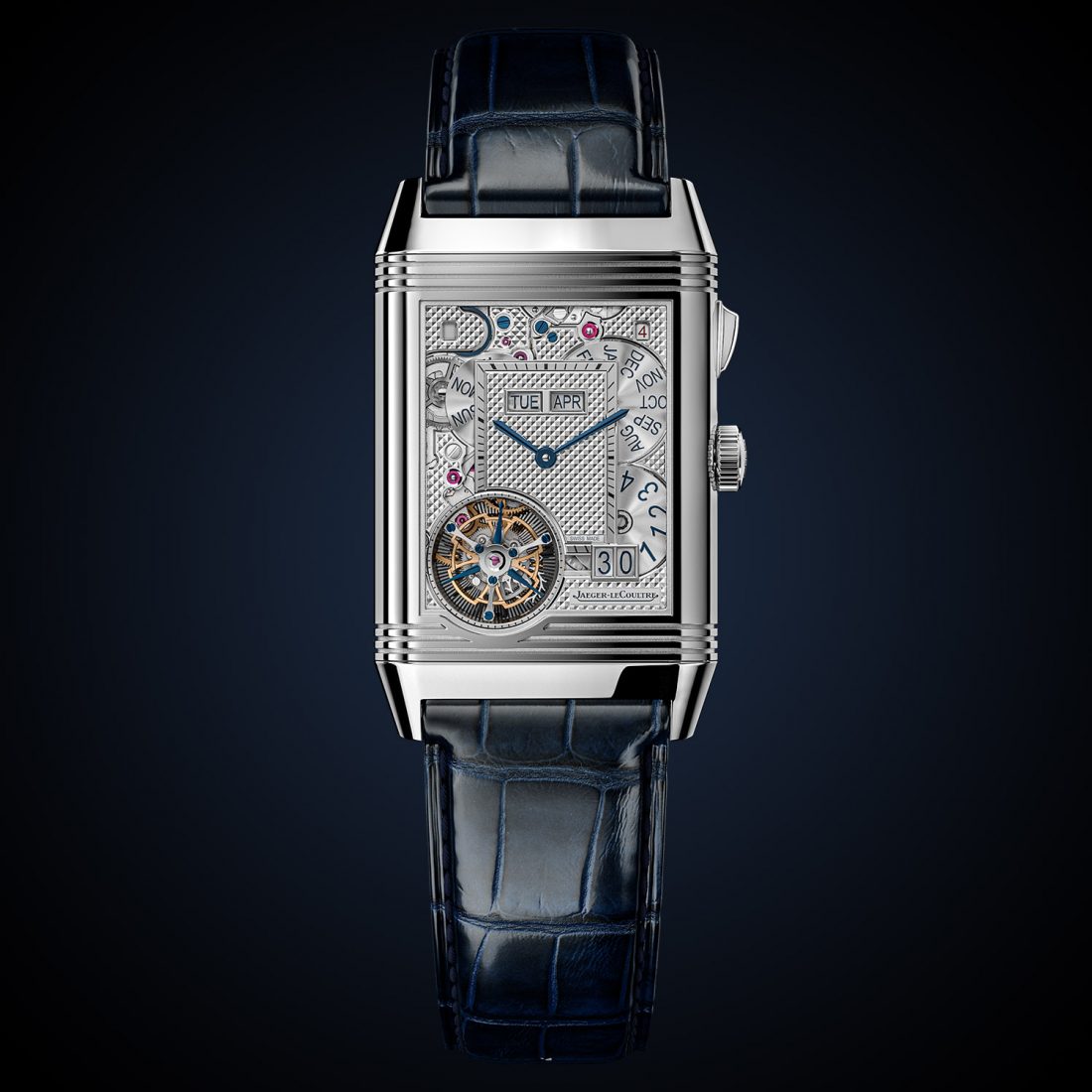