When two geniuses of haute horlogerie, Edouard Meylan (H. Moser & Cie.) is Maximilian Büsser (MB&F) come together to create a collaborative timepiece, of course the result will be truly special. 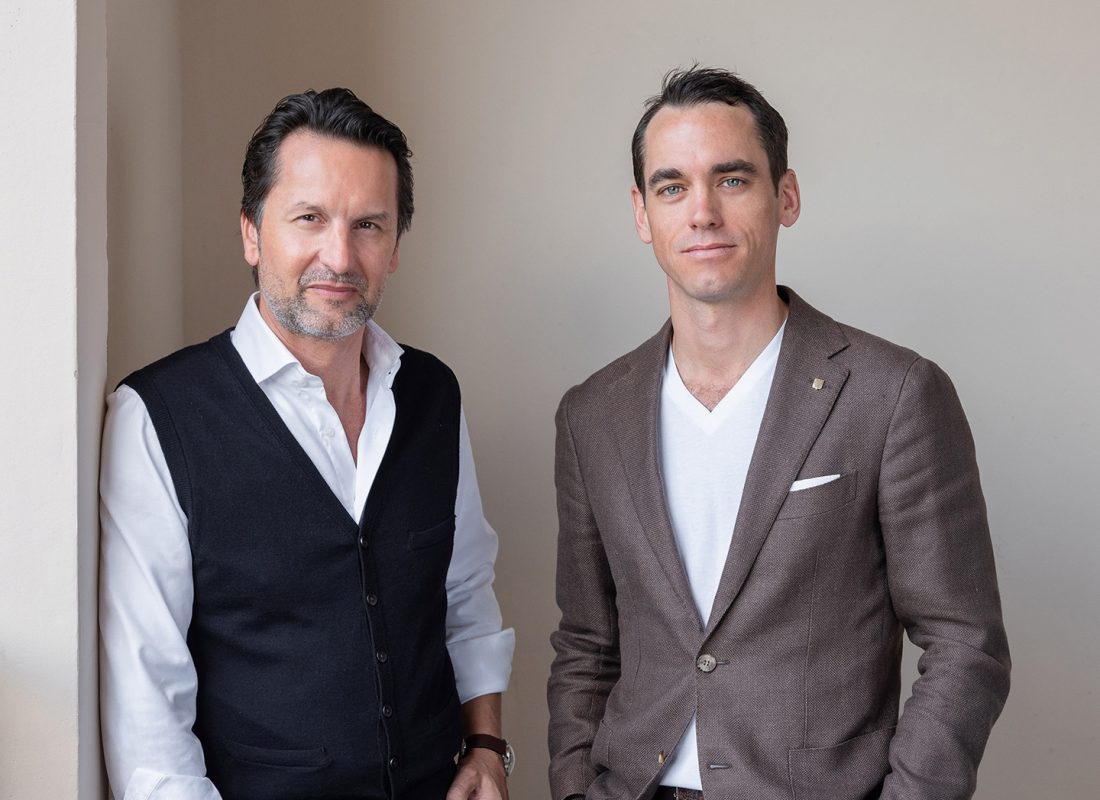 H. Moser & Cie. e MB&F they are two independent Swiss companies on a human scale, managed by two personalities animated by a great passion as well as long-time acquaintances, who appreciate and respect each other both personally and professionally. In fact, the two brands have been collaborating with Precision Engineering AG, a subsidiary of H. Moser & Cie, which, in particular, provides a MB&F its spirals. It is therefore not surprising that MB&F asked Edouard Meylan to participate as a "friend" of the brand in the creation of an example of performance art. Another aspect of this collaboration lies in its reciprocity.

Maximilian Büsser tells: “When I called Edouard to tell him I wanted to collaborate on a creation, I mentioned that I really liked the smoked Moser dials, the double hairspring and the Concept series of watches. Edouard immediately told me that he would allow me to borrow these elements on condition that he could reinterpret one of my "machines". After the initial surprise, I thought about it. Being half Indian and half Swiss, I firmly believe that mixing DNA gives interesting results; so why not try the experiment in watchmaking? I therefore accepted and suggested the FlyingT model which is particularly dear to me ”. 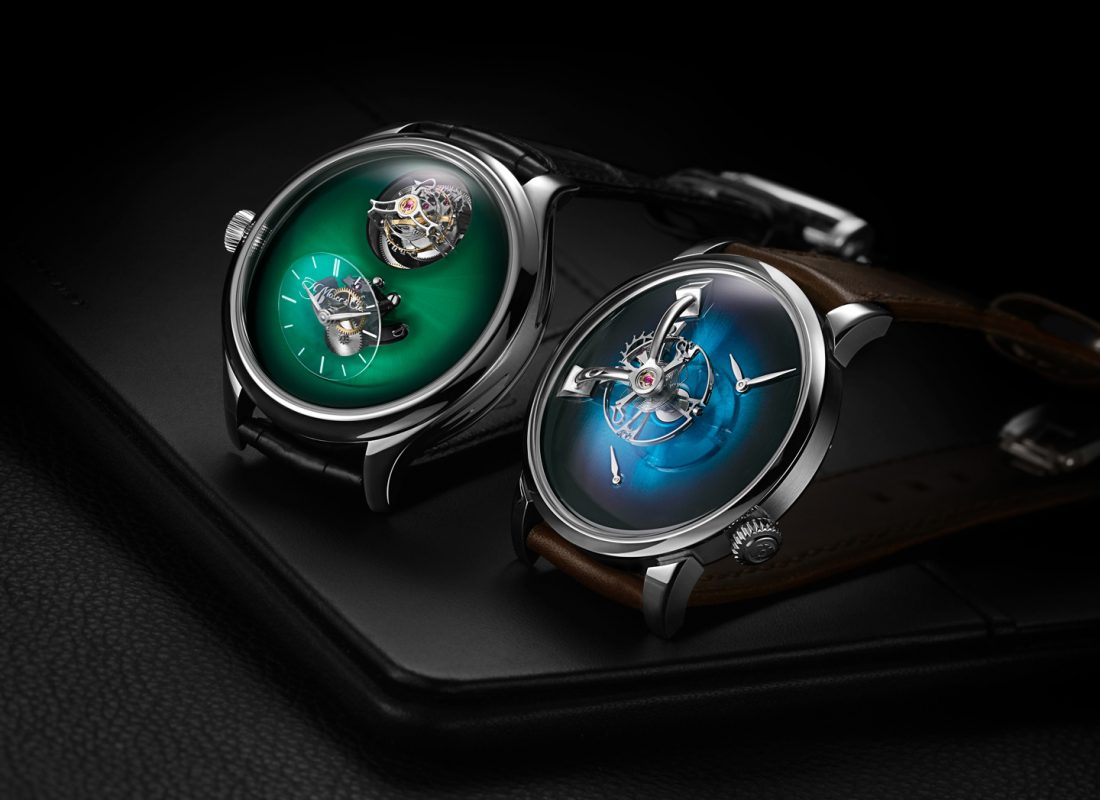 Animated not only by a spirit of sharing and transparency but also by the desire to cultivate the concept of union that is strength, H. Moser & Cie. e MB&F they therefore created two models together, available in different variants and offered in limited series of 15 pieces. The number 15 refers to 15° anniversary of MB&F and pays homage to the 15° anniversary of the relaunch of H. Moser & Cie. By combining their skills, these two brands, competitors and friends at the same time, work to coordinate and combine the strengths of talented artisans, in total harmony with the philosophy of MB&F.

From this extraordinary and unprecedented collaboration, therefore, 2 different co-signature creations are born, two interesting types of watchmaking cross-hybridization that combine their skills. The first born from this joint venture is the new H. Moser & Cie. X MB&F Endeavor Cylindrical Tourbillon. 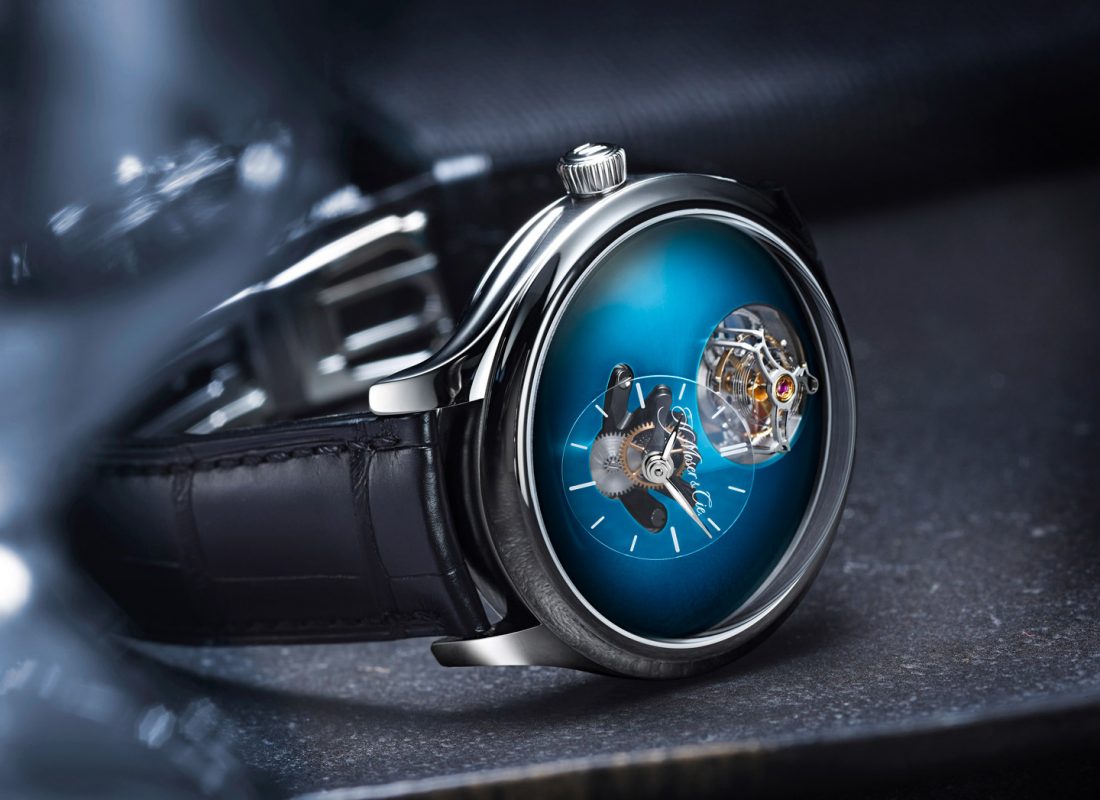 H. Moser & Cie. borrowed from MB&F the concept of three-dimensional movements: a distinctive trait of the Geneva Maison's identity protected by a sapphire crystal dome and equipped with a one-minute flying tourbillon that rises above the main dial through a ventricular opening at 12 o'clock. the expertise of its subsidiary Precision Engineering AG, H. Moser & Cie. equipped the tourbillon with a cylindrical hairspring, the same as the one that Precision Engineering AG had already developed for the LM Thunderdome di MB&F. 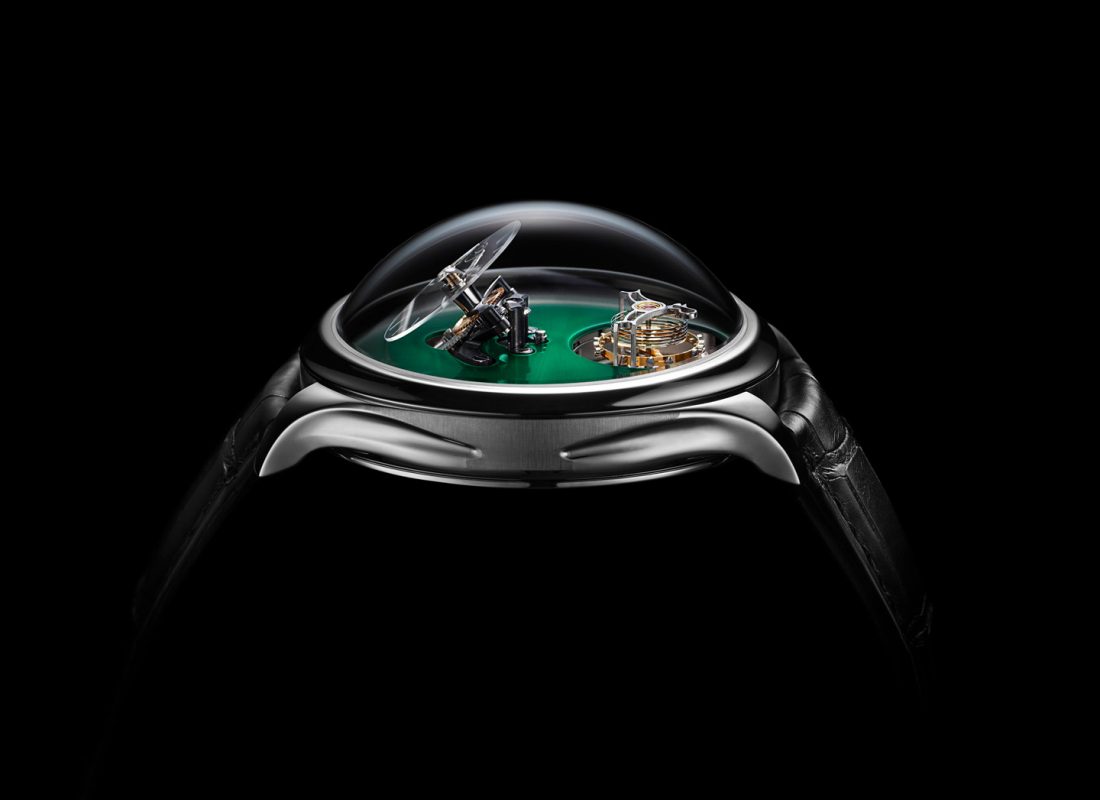 Invented in the XNUMXth century, the cylindrical spiral resembles the shape of a worm or a corkscrew, rising perpendicularly around the upper pivot of the balance wheel axis. Generally used in marine chronometers of the time, it develops in a concentric, and therefore geometric way, since it works perfectly along the axis of its pins. This gives it a significant advantage over the flat spiral, the ends of which tend to exert a force on the pins, despite the presence of the end bends. Philips o Breguet specifically developed to partially correct the non-concentric opening of the spiral. Equipped with a Breguet hairspring on both attachment points, the cylindrical hairspring reduces pin friction, significantly improving the isochronism. Thanks to its particular shape, this cylindrical spiral is much more difficult to produce and one takes ten times more time to make than a traditional spiral. 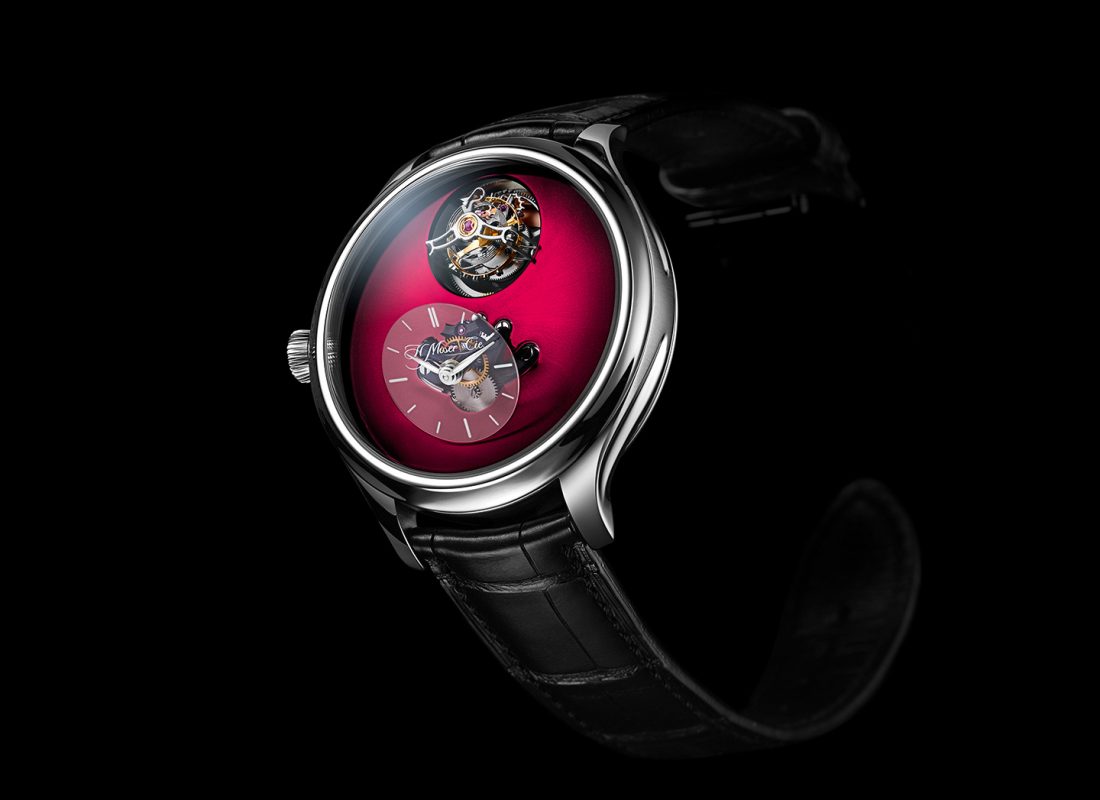 Another reference to the identity of MB&F rlies in the inclined quadrants that H. Moser & Cie. used for the small dials of the hours and minutes. Their 40 ° inclination means that the only one to whom the watch reveals the secret of time is its owner. In addition, they are mounted on a bevel gear which ensures optimal torque transmission from one plane to another. 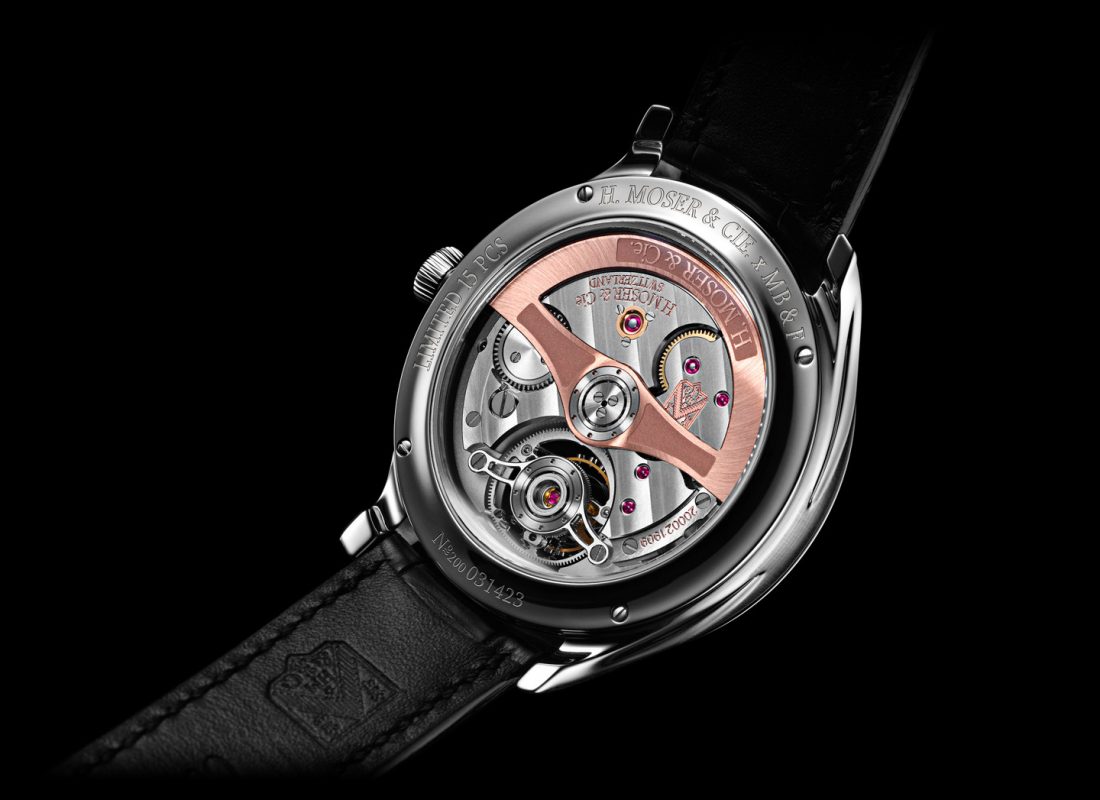 How do you explain Edouard Meylan: “We have moserized the MB&F universe by developing a smaller sapphire crystal dial that blends in with the rest highlighting the beauty of our smoked dials. And to preserve the purity and elegance of this authentic watchmaking work of art, we have engraved our logo as a watermark on the small sapphire crystal dial, thus underlining the personal character and intimate relationship that binds it to its owner ”. 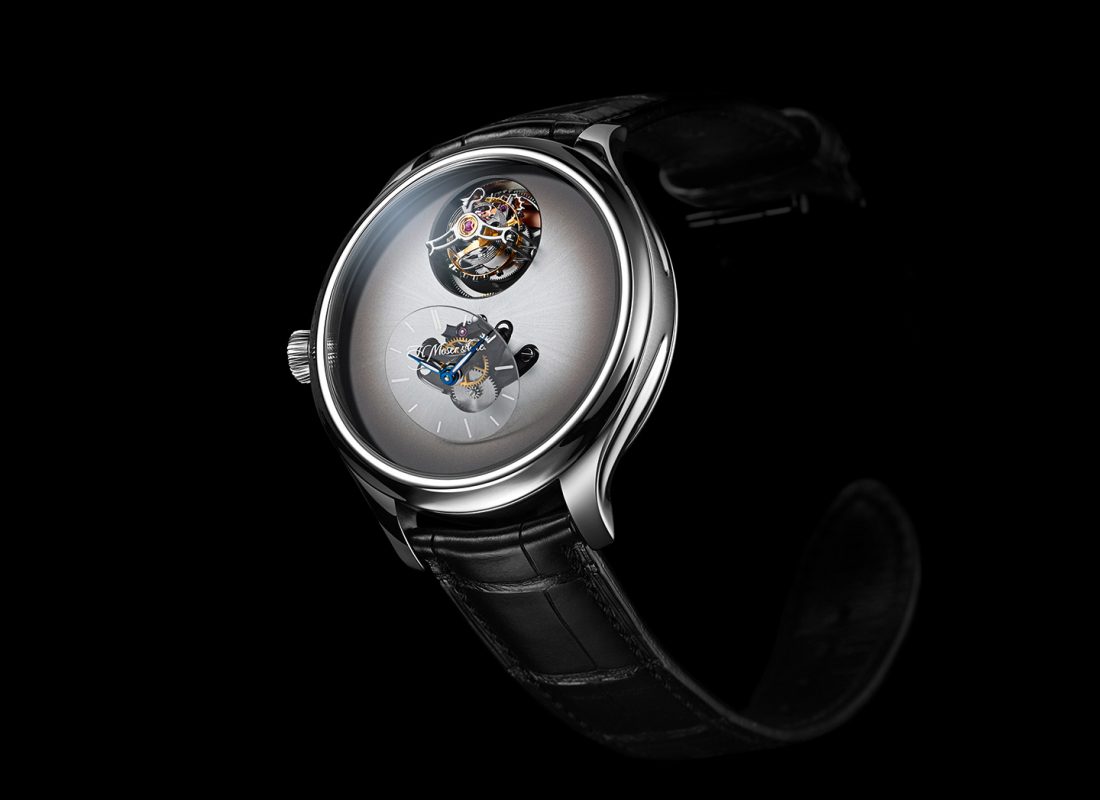 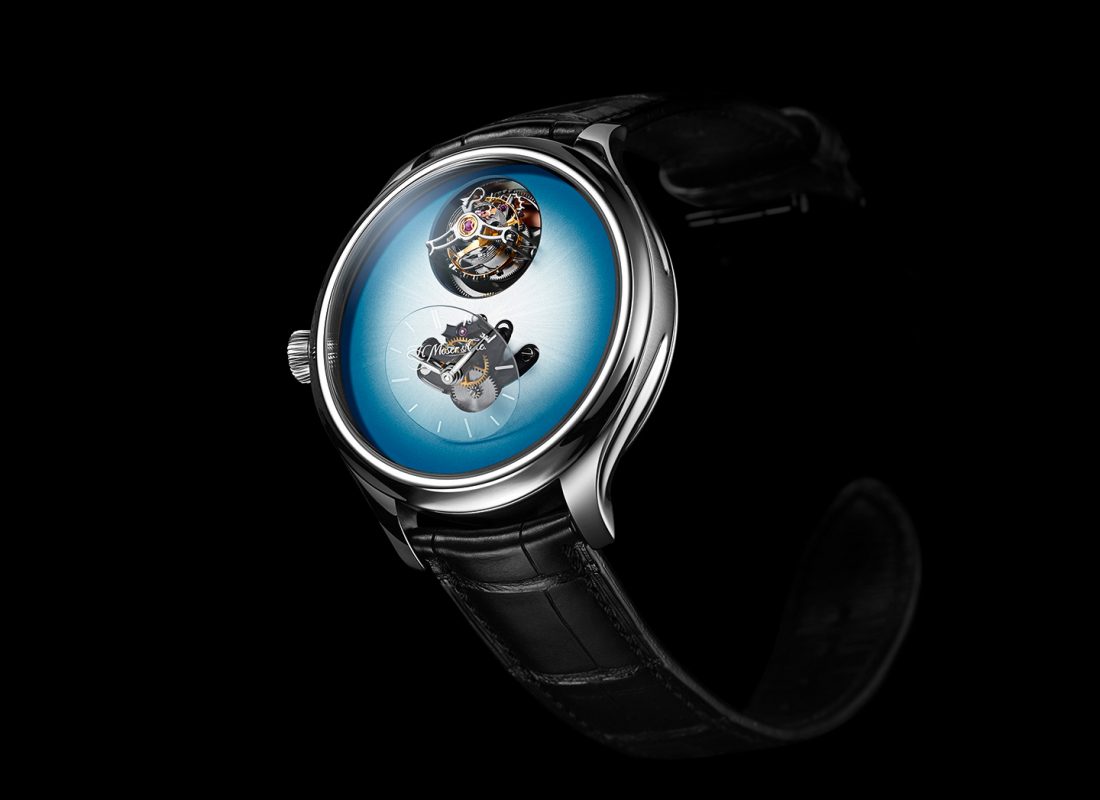