Finally, the thinnest automatic mechanical watch ever built passes from the concept phase to actual production and officially becomes available on the market. It was the year 2018 when Piaget during the SIHH became the absolute protagonist of the scene and broke the record for the thinnest mechanical watch in the world by unveiling theAltiplano Ultimate Concept. At just 2mm thick, it reduced the 3.6mm height of the previous record holder, lo Jaeger-LeCoultre Master Ultra-Thin Squelette (photo under). 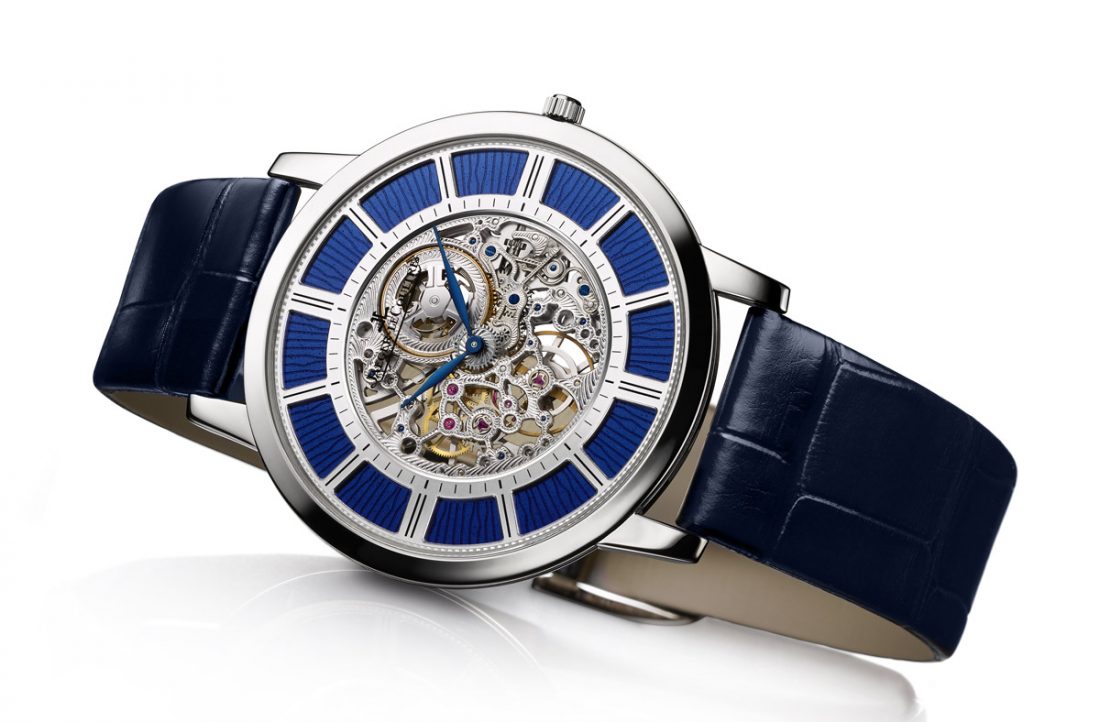 Of course, it was no surprise to see such a result from Piaget. Over the years, in fact, the brand has established numerous world records relating to the thickness of timepieces, with automatic or manual movements and, the records, are made to be broken. This concept watch at the time raised many questions about its future presence on the market or not, but now the Piaget Altiplano Ultimate Concept is finally available and includes a tailor-made personalization service. 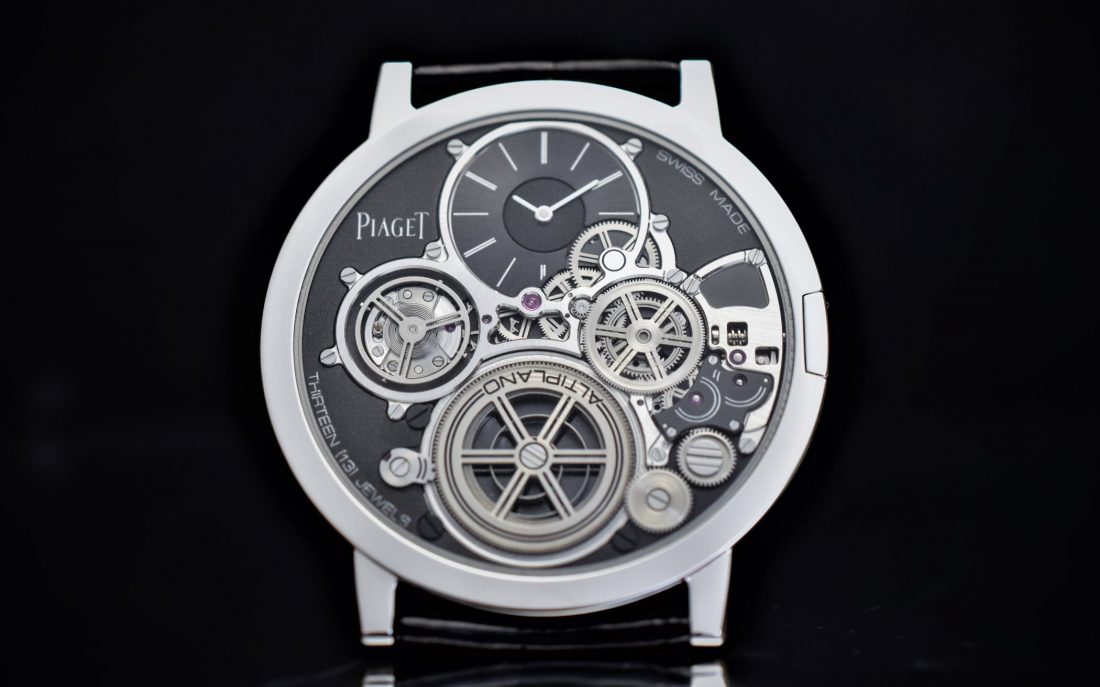 The Piaget-Altiplano-Ultimate-Concept presented at SIHH in 2018

For over 60 years Piaget he tirelessly pursued his pursuit of slimness. The manufacturing mastery of ultra-thin movements has forged the identity and reputation of the brand since 1957, when Valentin Piaget introduced the Caliber 9P, a mechanical movement of suns 2 mm. Since, Piaget has consistently set milestones in this field. In 1960 the Caliber 12P da 2.3 mm with micro rotor was the thinnest automatic movement on the market and with the advent of the new millennium the brand continued its tradition of producing elegant ultra-thin watches by developing the Caliber 430P da 2.1 mm thick. Furthermore, the manufacture has not limited itself and has also invested in the development of a series of complications such as automatic movements, skeletonized, chronographs or extra-flat tourbillons. Over time, the supremacy of Piaget in the ultra-thin has been questioned by traditional industry players such as Audemars Piguet o Vacheron Constantin as well as the newcomer Bvlgari and its impressive collection eight finissimo. With the presentation of the toltiplane Ultimate Concept, today Piaget delivers an impressive blow to the competition, setting a record that will be hard to beat.

Il Piaget Altiplano Ultimate Concept is a radical redefinition of the architecture of a watch, resulting in the filing of five patents. Its absolute slenderness was obtained by fusing the main movement plate, case and bezel into a single component and, to ensure the necessary structural rigidity, it is made of an ultra-resistant cobalt alloy. All tolerances have been reduced to minimum levels and the crystal, for example, is only thick 0.2 mm. 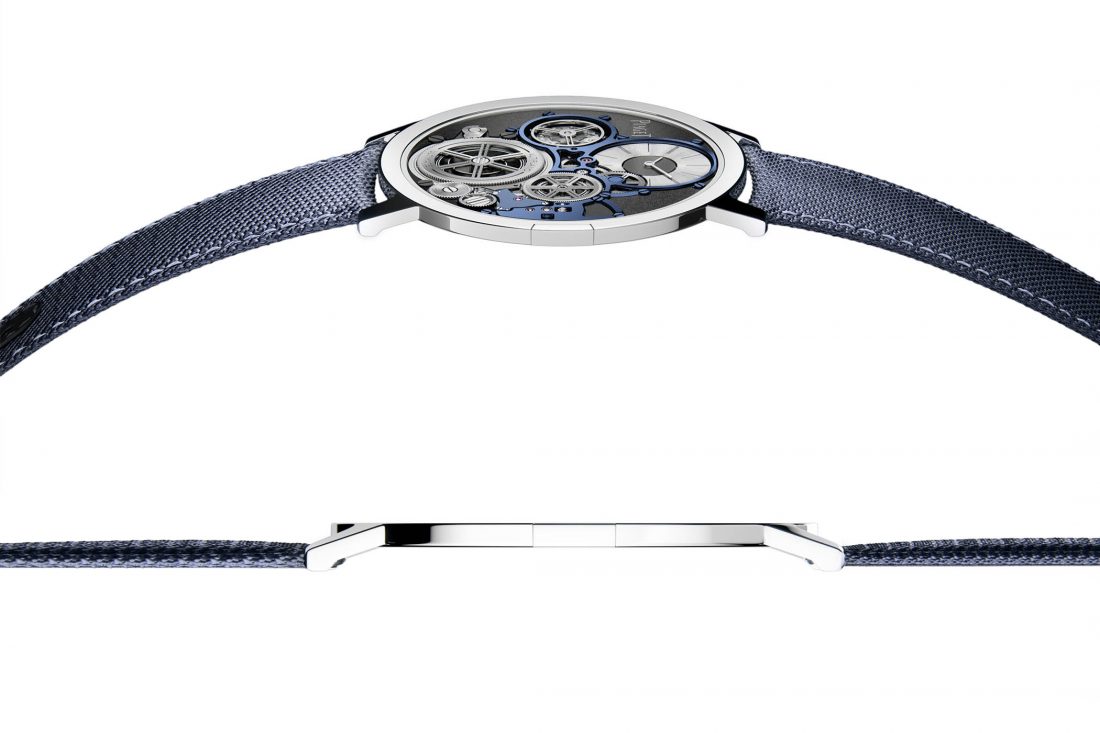 The architecture of the movement is such as to avoid the need for bridges and the same applies to the monobloc balance wheel, which is cantilevered and rotates directly on the bottom. In this way, the rocker, the inner ring of the ball mechanism and the roller form an indivisible part and the spring is positioned in an unusual way under the rocker itself in a recess made directly in the bottom without the presence of covers or drums. . The absence of an index assembly is compensated for by an adjustable pin. Despite the watch's slimness, the 40-hour power reserve is equivalent to that of many movements
standard. 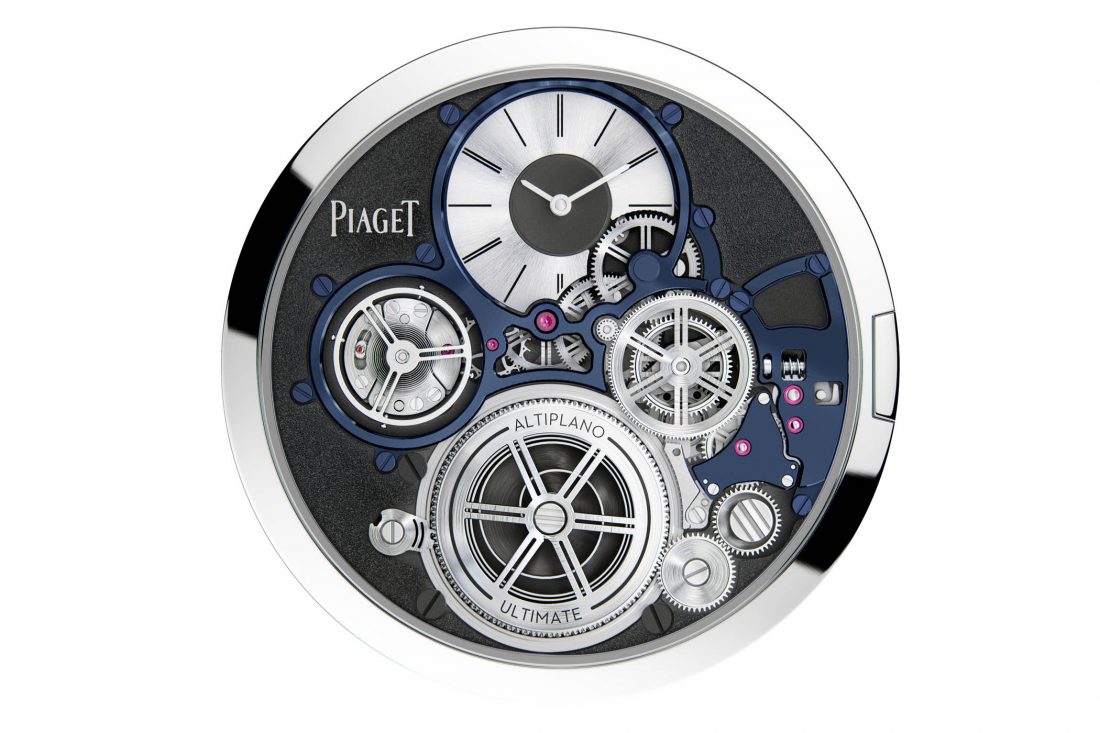 The crown has also been completely redesigned. It is flat, telescopic (requires a specially designed wrapping tool) and is perfectly integrated into the edge of the case. The traditional sliding pinion clutch and consequent toothed crown are replaced by a "endless lives". The off-centered dial required the development of a stem "staggered”, While the hour and minute display is integrated directly into the thickness of the movement: the conventional hour hand is replaced with a rotating indicator disc while the minute hand operates in the traditional way. Finally, the watch is completed by an alligator leather or ultra-thin fabric strap (1.5 mm), equipped with a pin buckle in cobalt alloy. 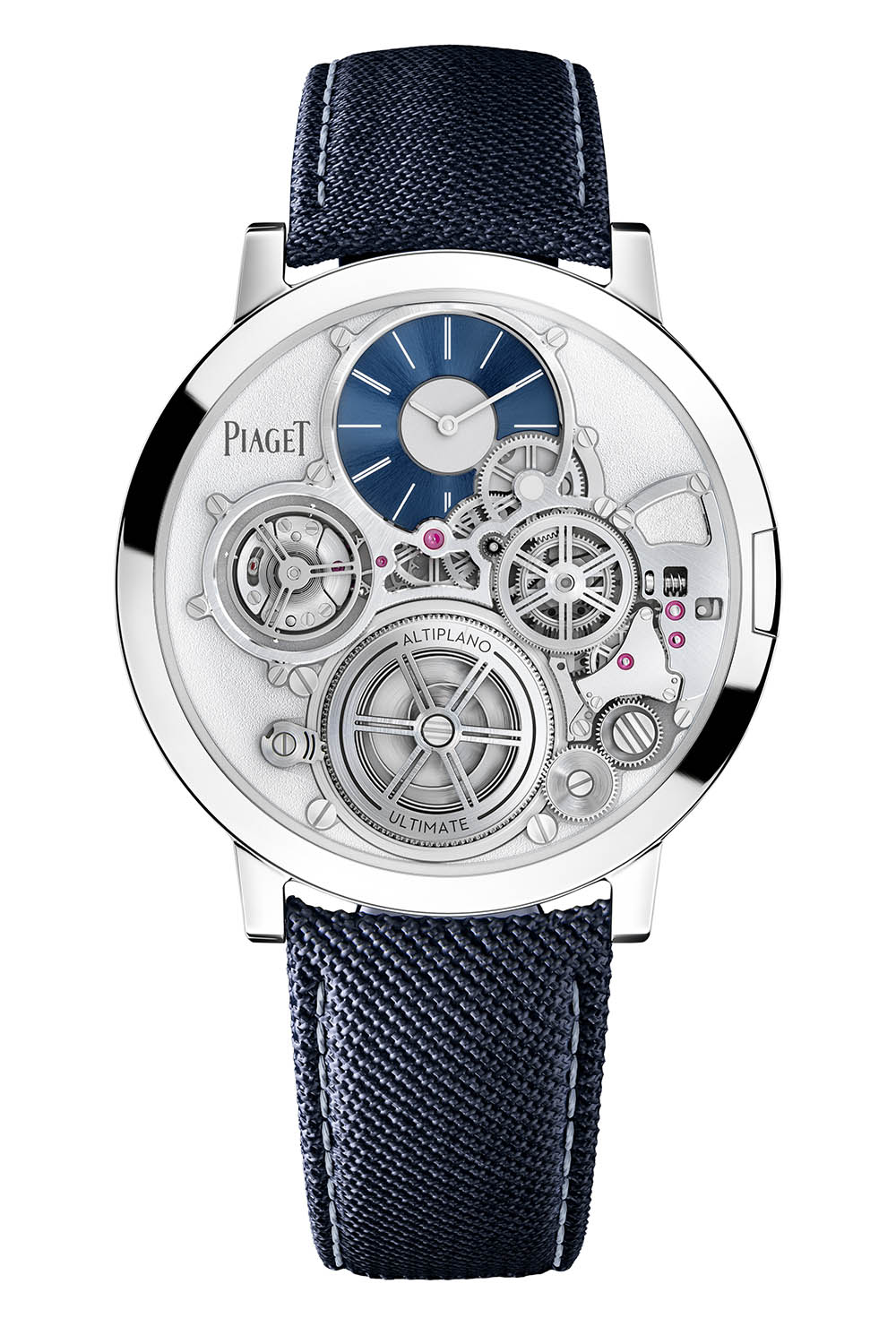 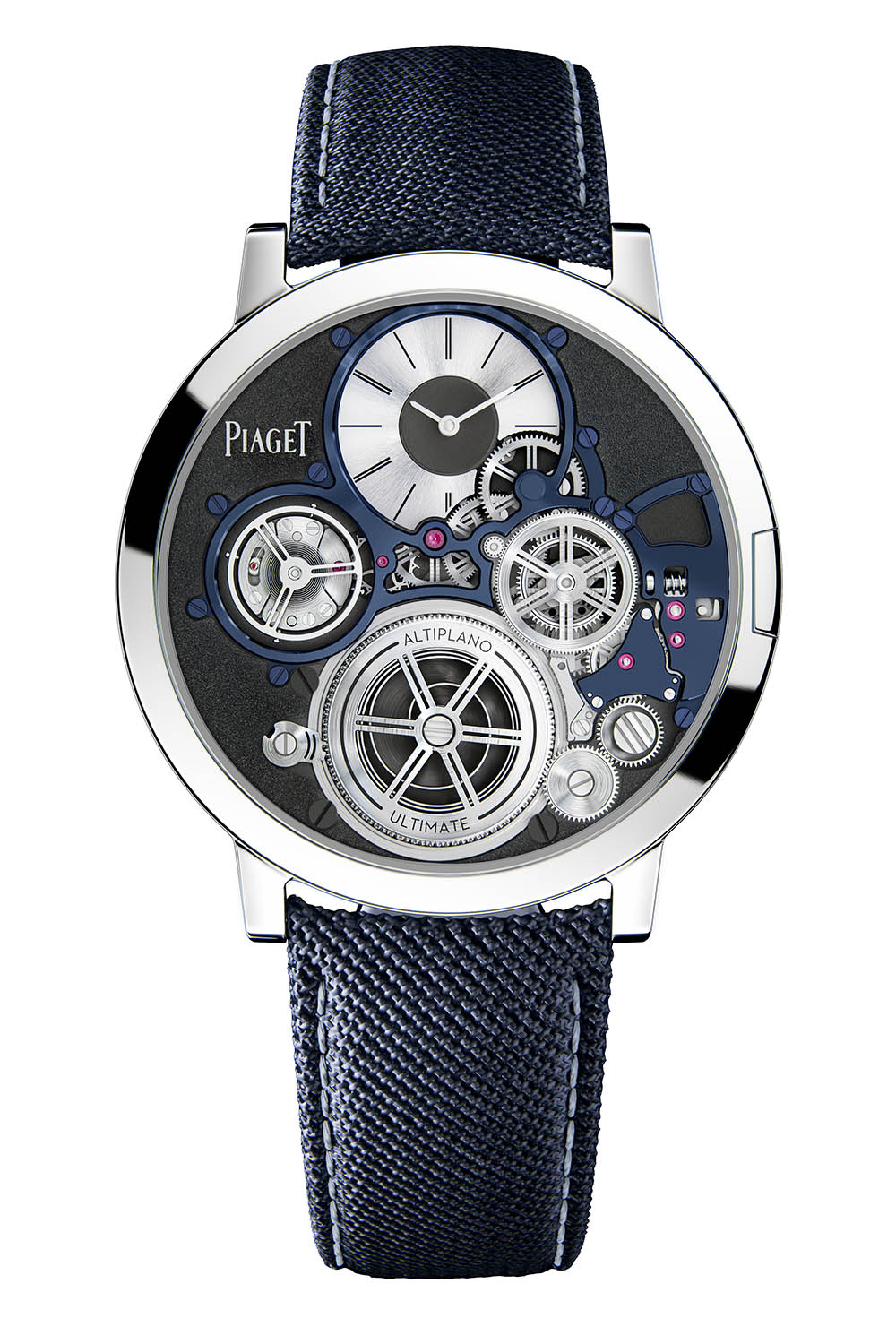 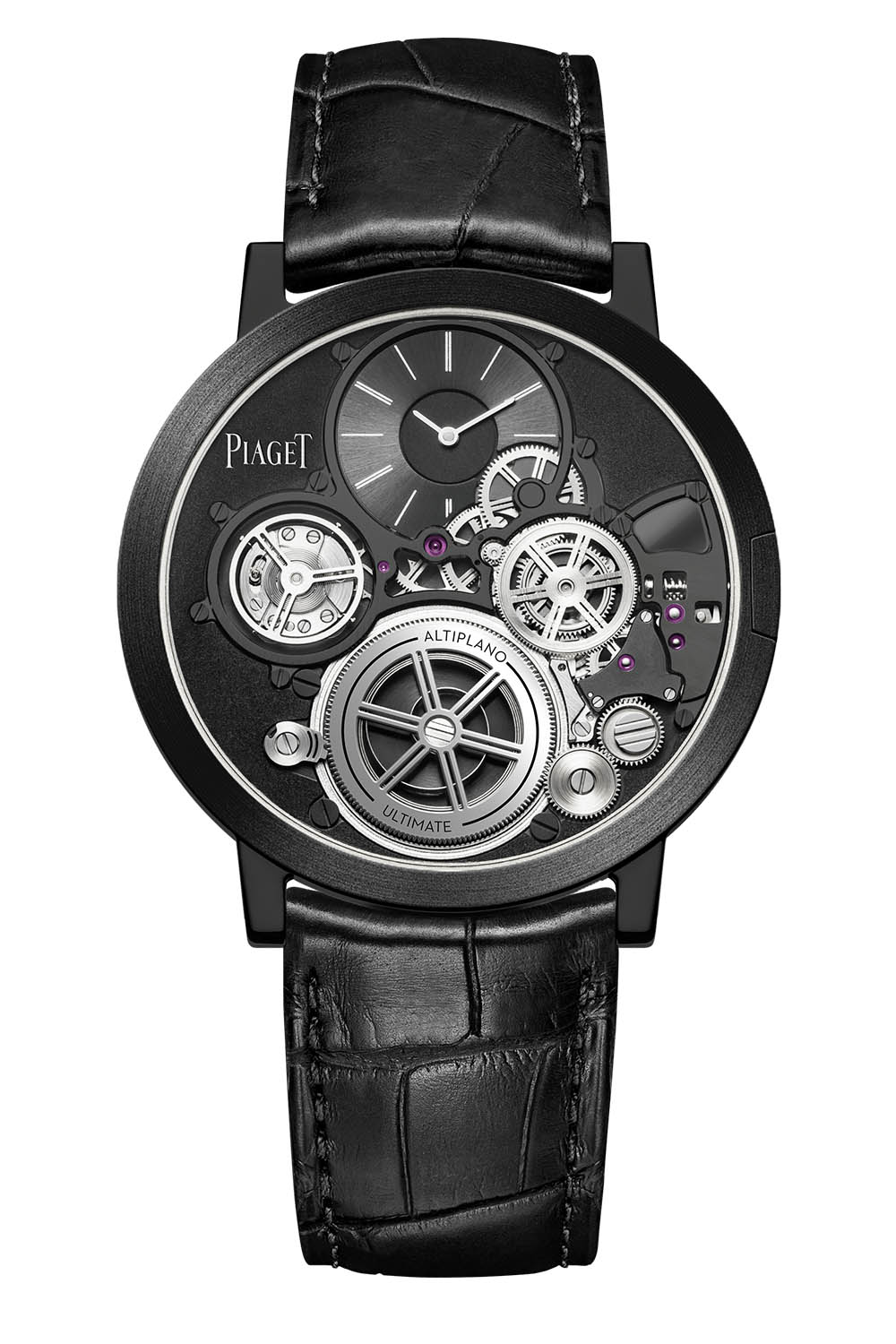 This Piaget Altiplano Ultimate Concept it can now be ordered in the various boutiques but will remain, however, a rare watch and available in limited quantities as part of a bespoke personalization service that will allow buyers to select a variety of options, including the color of the bridge and dial , the finish of the hands and the main platen or strap. Altogether, there are over 10.000 possible configurations for this Altiplano Ultimate Concept. For this purpose, software and a special presentation set will be available in the boutiques Piaget to help the customer in their choices. The selling price starts from 410.000 Swiss francs with customization options "standard".